Why Houston Will Be Hard to Count in Census 2020

Counting people is vital to our democracy. Every ten years, the US government has a constitutional obligation to conduct a census that counts everyone living in the United States. This count determines how many Congressional representatives each state receives, the levels of Federal funding for state and local governments and federal programs, and serves as the statistical foundation upon which every survey and poll is weighted.

In other words, an accurate Census will help Texas gain proper political representation, obtain Federal funding, and get an accurate view of who we are.

Every Houstonian – Republican, Democrat, White, Black, Hispanic, Rich, Poor – should be concerned about getting an accurate count in the upcoming census (and they should all fill out their questionnaires!).

Unfortunately, there are a number of factors working against getting a complete count in Houston and Harris County in 2020.

Historically, Houston has below-average response rates on the census form.  Compared with residents of other areas, lots of Houstonians don’t mail back their census questionnaires right away, which means census workers have to knock on doors to obtain accurate counts. This costs money and time, and it increases the risk that some people won’t get counted at all.

In 2020, there’s an even bigger risk of an undercount. There are budget constraints, lack of leadership at the Census Bureau, and changes in the way the census is conducted (most people will fill it out online). Most concerning is the potential inclusion of a citizenship question on the census form, which will likely depress response rates in areas with large immigrant communities.

In this post, I wanted to look at Harris County’s census response rate to better understand:

To help state and local governments prepare for the upcoming census, the Census Bureau calculates a “Low Response Score” for every census tract and block group. This score represents the expected share of households that will not return their census form. As a result, they will require additional outreach and follow-up. You can read the full methodology for yourself. In 2010, just over 1-in-5 US households did not fill out their census questionnaire, but this varied significantly across communities.

The Low Response Score for Harris County is 24%, meaning that 1-in-4 households – over 360,000 households – are expected to need additional follow-up to complete their census questionnaire. That’s five points higher than the average US county (19%), making it the sixth highest score among the 25 largest urban counties in the US, on par with Los Angeles and Philadelphia Counties. 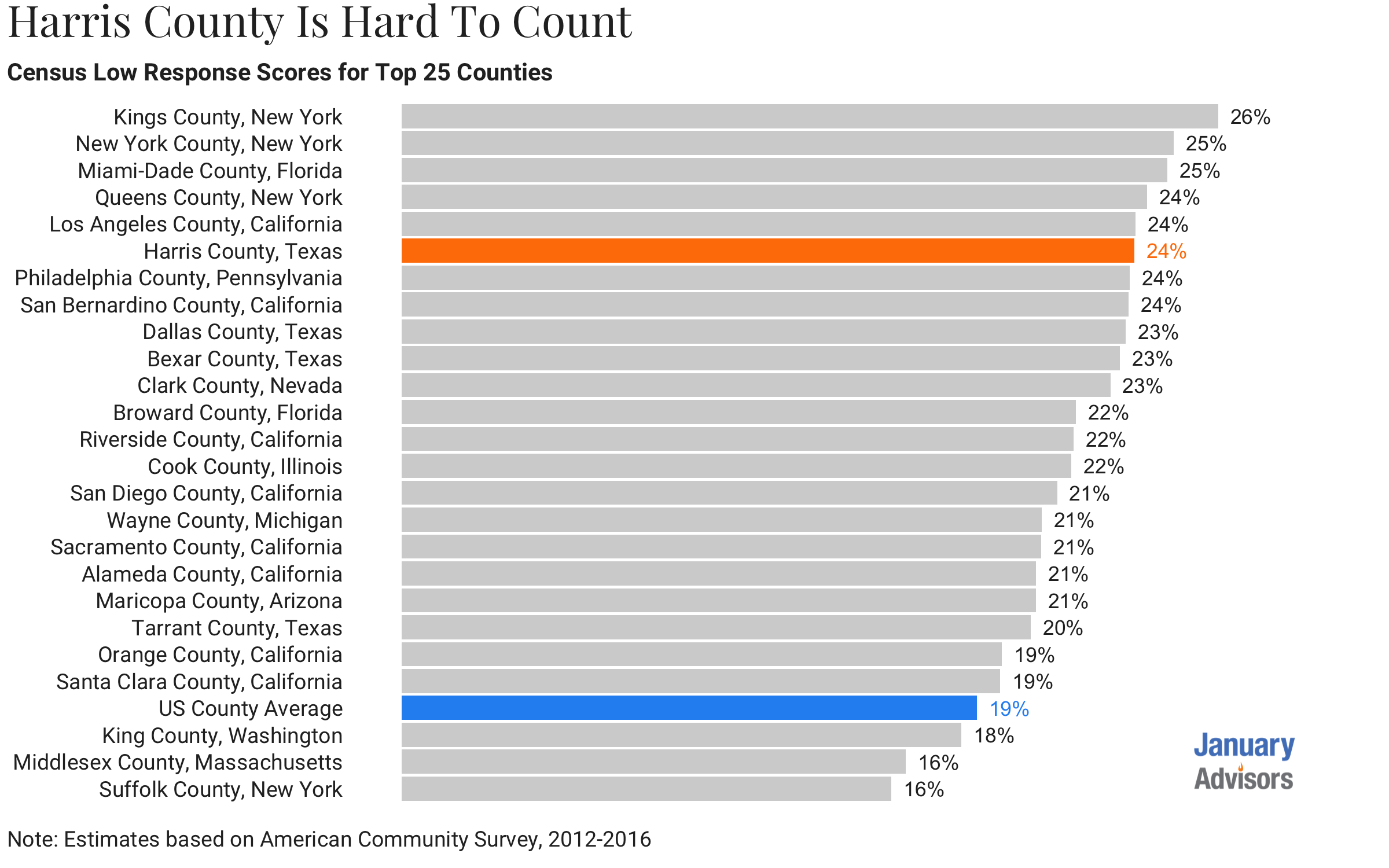 A five-percentage point difference from the US average may not seem like much, but it amounts to 77,000 more households that need additional follow-up in Harris County.

And if we miss counting just a small number of these households, the economic impact could be huge. A recent study by George Washington University estimated that Texas might have lost $1,100 in federal funding from five Health and Human Services programs for each person missed on Census 2010 (assuming a 1% undercount). Using that estimate as a baseline, Harris County stands to lose nearly $54 million per year if just 1% of its residents (46,500 people) are not counted on Census 2020.

To calculate an area’s low response score, the Census Bureau looked at a host of social and demographic characteristics that were most predictive of response rates in Census 2010. The two most important predictors were (1) the numbers of rental units and (2) the share of the population ages 18 to 24. As you might expect, areas with high rental rates and lots of young people tend to be less likely to respond and harder to count.

So how does Harris County fare on these and other key predictors of low response rates? How does it stand out compared with other large counties?

The chart below shows how much Harris County and the 25 largest counties differ from the US average across the Census Bureau’s key predictors of low response rates. The chart plots counties according to their z-scores, or standard deviations from the average, which allows apples-to-apples comparisons across different predictors. The farther to the right of the average line a county is on a given predictor, the more common that characteristic is (relative to the US average) and the more important it is in driving low response rates. Likewise, if a county is to the left of the average line, that characteristic is less common and less important to low response rates. 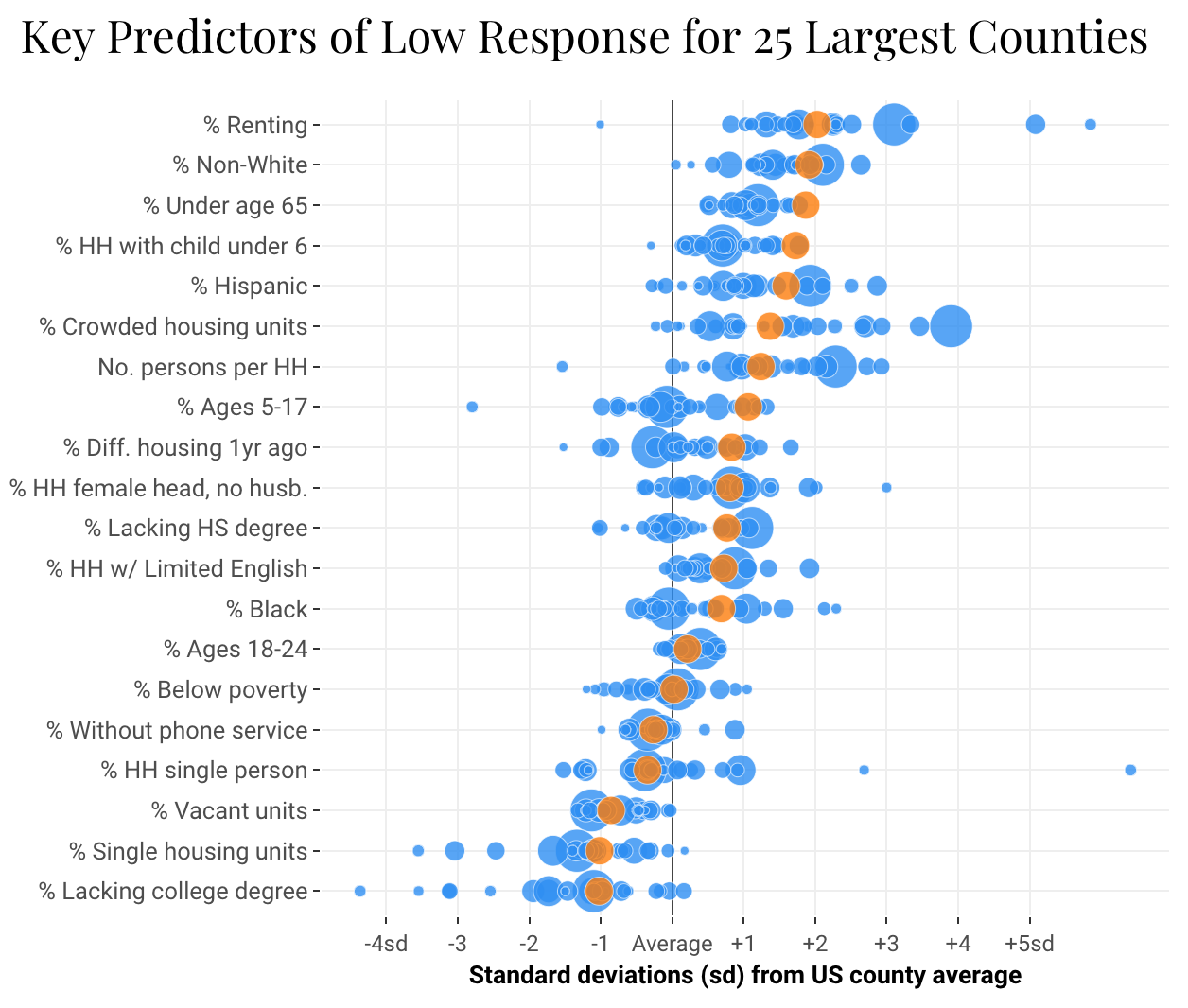 The metric on which Harris County differs the most from the rest of the country is the number of renters. Around 45% of housing units in Harris County are rentals compared with 29% in the average US county. This is pretty similar to other urban counties, however, and is actually much lower than Los Angeles County and counties in and around New York City.

But Harris County really stands out in terms of race-ethnic diversity and age. Nearly 70% of Harris County’s population is non-White compared with 25% in the average US county. Low response rates are more common in areas with fewer non-Hispanic Whites. Diversity in Harris County is driven primarily by the large numbers of Hispanics, but the county also has an above-average share of Black residents.

Harris County also has a very young population. Younger people and households with children are much harder to count than average. More than 9-in-10 residents of Harris County are below the age of 65 (compared with 82% nationally) and 26% of households have a child under age 6 (19% nationally).  Both are risk factors for a low response rate and will be unique challenges for Harris County in Census 2020.

Another challenge will be Houston’s high mobility rate in the wake of Hurricane Harvey. As these data from 2012-2016 show, Harris County already had a relatively high number of households that reported moving residences every year. As the region continues to recover from Harvey, targeting outreach efforts to neighborhoods hit hardest by the storm and understanding who still lives there will be critical.

Citizenship and the Risk of an Undercount

One risk factor not used to calculate low response scores that may be particularly consequential for Census 2020 is the share of residents who are not US citizens. For the first time, the Census Bureau intends to include a question about citizenship status. This move will undoubtedly make many families, especially those with legal or undocumented immigrants in their household, reluctant to fill out their census form for fear the government might use their information for immigration enforcement (which is illegal). Even if the question is ultimately excluded, the amount of misinformation and fear created along the way could still depress response rates.

How do I know the number of non-citizens? It turns out the Census already collects information about citizenship status on the American Community Survey (ACS), which surveys over 2 million Americans annually. This means any benefits to asking about citizenship on the decennial census – information that we already have – will surely be outweighed by the costs of a potential undercount (as well as the time and money required to follow-up due to non-response).

In addition, as the chart below shows, neighborhoods with lots of non-citizens are at much higher risk of not responding to the census than others. In fact, nearly all of Harris County census tracts with at least 20% non-citizens have low response scores that exceed the national average. Among the handful of tracts whose majority of resident are not citizens, upwards of 1-in-3 households are expected not to respond to the initial census form. 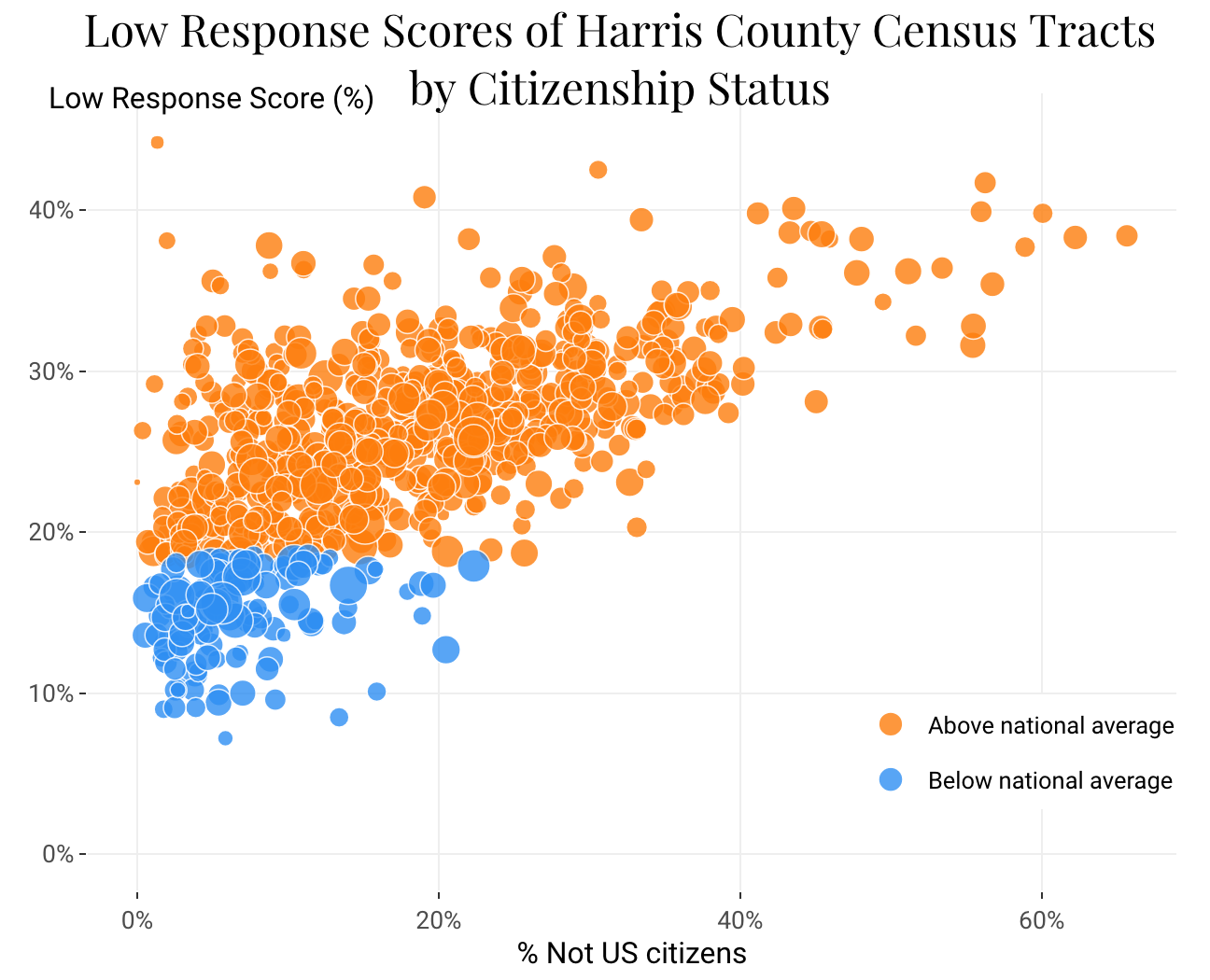 It’s hard enough to get residents of these neighborhoods to respond to the census. Asking about citizenship status will almost certainly lead to higher levels of non-response and, potentially, a massive undercount.

Where Outreach is Needed

The risk of non-response varies widely across Harris County. Where should Harris County and Houston city officials concentrate their efforts to prevent an undercount?

The map below shows low response scores by Block Group across Harris County. The areas in orange are those with low response scores above the national average – the darkest shade of orange are areas that are hardest to count. Filters on the top right allow you to isolate block groups that also score high (75th percentile or above) on key predictors of low response. For instance, you can see the overlap between neighborhoods with high shares of Hispanic residents and a high risk of low response rates. 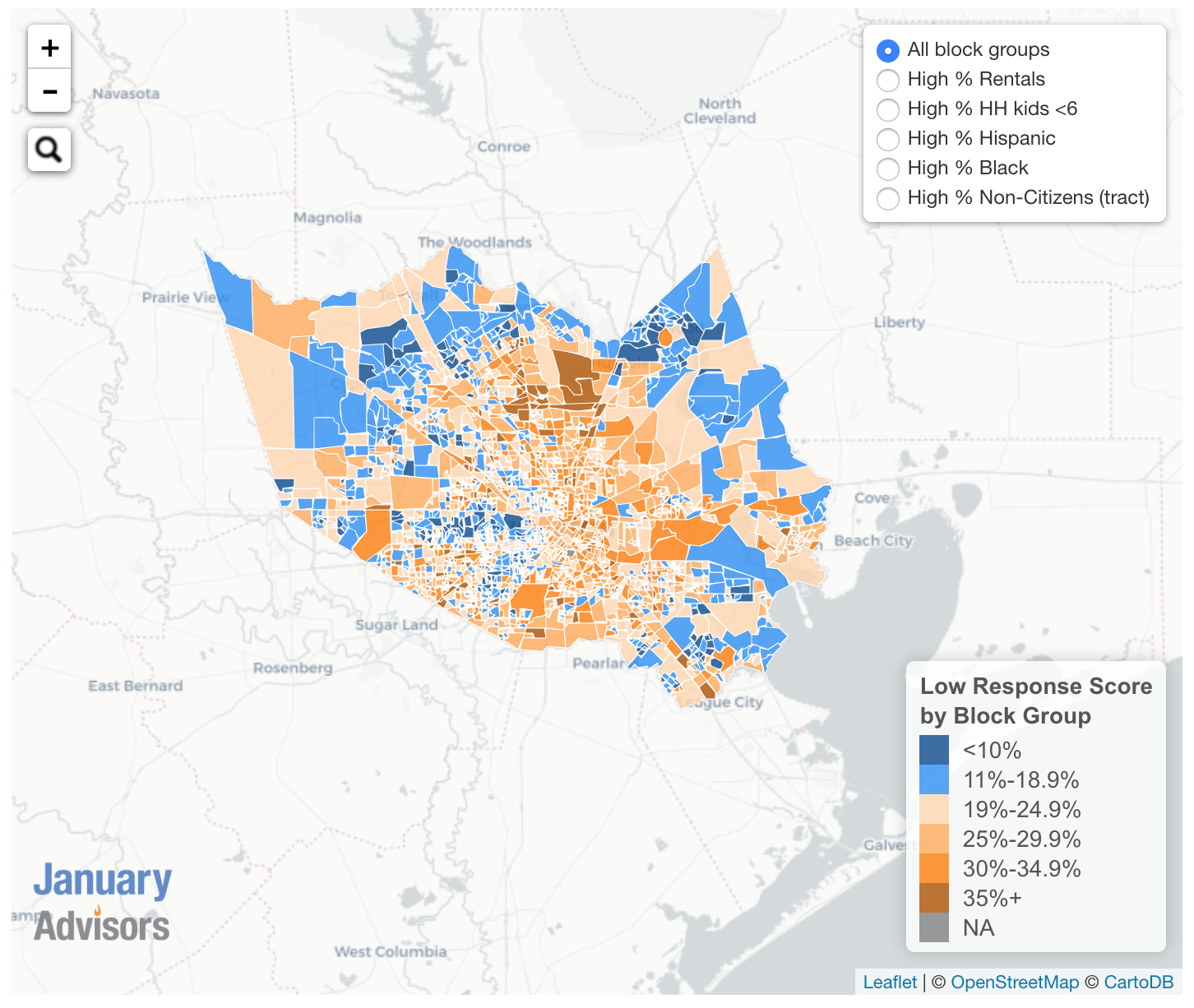 Addressing low response rates and preventing an undercount will require a coordinated approach among all parties: government officials, non-profit groups, houses of worship, local schools, child care providers, the business community, and so many more. Good data and clear messaging should be used to coordinate outreach.

And even though the Census helps us understand the known hard-to-count populations, we also need to identify and come up with strategies to reach out to other at-risk groups: the LGBT community, the homeless, religious and ethnic minorities, and families impacted by Hurricane Harvey.

Our team here at January Advisors is committed to this data-driven approach to obtaining an accurate Census count. If you would like to collaborate on a project, please let us know.