In the November 2019 election, voters in Harris County, Texas could vote at any polling location, not just the polling place assigned to their precinct. This change was designed to make it easier for more people to participate in the electoral process.

In order to promote the program, the Harris County Clerk brought in our friends at The Black Sheep Agency to create the VOTE YOUR WAY campaign. We were fortunate to be a part of their team, and we built a suite of technology tools to help voters.

Now that the election is over, we wanted to know how many people took advantage of the VOTE YOUR WAY countywide polling program by, ahem, voting “their way.”

In other words, who was originally assigned to vote somewhere, but actually voted somewhere else? What kind of voter was more likely to vote at a different polling place? Where do they live and how far did they travel to vote?

Here are five key findings from our analysis.

1. Half of General Election voters voted “their way.”

As others have reported, just over half of voters (52%) who cast ballots on Election Day did so at a polling location outside the boundaries of their voting precinct.

If we adopt this stricter definition and look at voters who voted at a polling location different from the one assigned to their precinct, 48% of voters voted “their way.”

Either way, the countywide polling program is a big success.

Younger voters were much more likely than older voters to vote outside their assigned polling location. 62% of voters ages 18-29 voted “their way” on Election Day compared with 36% of voters over 75.

Part of the reason for this striking age difference could be because younger voters are less likely to have developed a preference for or familiarity with their precinct-assigned polling place. If this is your first election or you are new to Houston, you may not even know where you are “supposed” to vote.

Younger voters are also more likely to be in the workforce and may have found it more convenient to vote close to the office rather than their home.

Finally, it’s also possible that younger voters may have had greater awareness of the VOTE YOUR WAY campaign through advertising and social media.

3. Voters from all types of neighborhoods took advantage of the program

Voters from some neighborhoods were more likely than others to cast ballots at a different location. For instance, nearly all residents of Downtown (95%) and IAH (89%; neighborhood surrounding Bush airport) cast their ballots at a polling location other than their precinct-assigned poll. The areas surrounding these neighborhoods also tended to have above-average shares of “vote your way” voters.

There were also pockets where below-average shares of voters voted “their way,” instead voting at their assigned polling location. For instance, the neighborhoods in southeast Houston, including Pleasantville (16%), Clinton Park Tri-Community (15%), Pecan Park (28%), Harrisburg/Manchester (21%), and Lawndale/Wayside (29%) were much less likely than others to vote outside their precincts.

Overall, however, we found no systematic demographic or socioeconomic differences between neighborhoods with high and low shares of “vote your way” voters. For example, the average ‘vote your way’ voter lives in a neighborhood that is 16% African-American, 7% Asian, 32% Hispanic/Latino, and 42% non-Hispanic White. The average traditional voter lives in a slightly less white neighborhood (40% non-Hispanic White), but the average race-ethnic composition is virtually identical between these groups of voters. This general patterns was true in terms of education, levels of poverty, and car access.

4. Most “vote your way” voters stuck close to home

We calculated the distances (as the crow flies) between every voter’s home address and their assigned polling place and the actual polling location where they cast their ballot.

Voters who cast ballots outside their precinct traveled, on average, an additional 3.1 miles from their homes to do so (median distance was 1 mile).

But not all “vote your way” voters traveled farther to vote. Given the way precinct boundaries are drawn, many voters actually live closer to a polling location outside their precinct than their assigned polling place. In fact, approximately 23% of “vote your way” voters cast ballots somewhere closer to their home than their assigned polling location.

Either way, most “vote your way” voters stayed relatively close to home to vote. For example, “voter your way” voters who live Downtown cast ballots all across the county, but the majority went to polling locations in their same neighborhood (31%) or nearby neighborhoods like Midtown (25%). We saw this same pattern throughout Harris County. 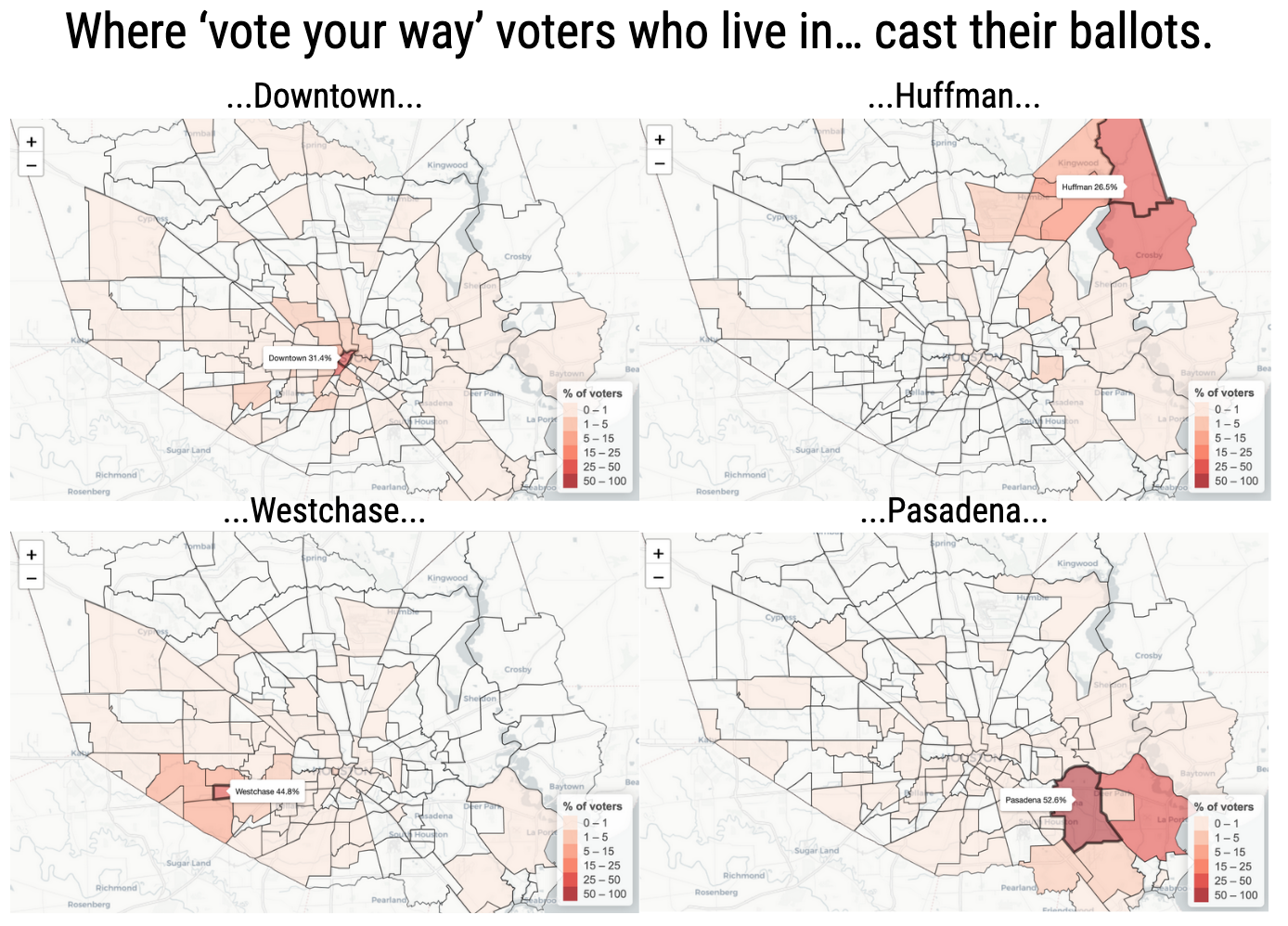 Note: Percentage of “vote your way” voters who live in selected neighborhood based on where they voted in General Election.

5. Over 2,000 people used a bot to find the nearest polling place

As part of the Vote Your Way campaign, our team worked on a textbot that allowed voters to text their address, find the nearest polling location, and get directions (car, public transit, and walking). Instead of downloading an app or visiting a website, this approach allowed everyone — even people without a smartphone or internet access — to find their nearest polling place. 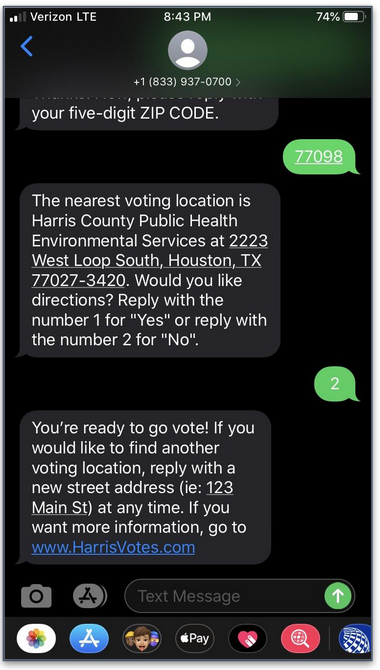 Still, we were not sure how many people would actually use the textbot. By the end of the Runoff Election, 2,069 unique users had engaged with the textbot.

Most new users started texting the bot the week before and during the General Election. But many users returned to use it again during the Runoff. More than half of those users who engaged with the textbot during the Runoff Election were returning users.

There’s still more to do to get the word out about the “Vote YOUR Way” program in Harris County, but we hope the textbot, as well as the poll map finder and “Your Vote Counts” dashboard, can help make it easier for more Harris County voters to cast their ballot in future elections. (Note: All three of these tools are taking a temporary hiatus through the holidays.)

As countywide polling places continue to spread across Texas, we hope more county clerk offices adopt the kind of modern, tech-savvy approach that Harris County Clerk did to roll out the VOTE YOUR WAY program in this election. We’re looking forward to helping more voters exercise their civic duty in 2020!