Public art can bring a neighborhood together. Murals especially can help create a stronger sense of place. They can also be used to raise awareness about important social issues facing a community. If you’ve ventured outside onto the streets of Houston lately, you might have seen a few new bright yellow murals urging residents to say “Yes!” to Census 2020 and fill out their census forms (if you haven’t already filled out your census form, do it right now).

Lopez Negrete Communications have been coordinating a network of people to produce these Census 2020 murals, working with local artists to design five murals across Harris County that speak to the culture and concerns of residents in our diverse and growing city. So far, murals have been put up in Gulfton, Montrose, Alief, South Central Houston, and Aldine. 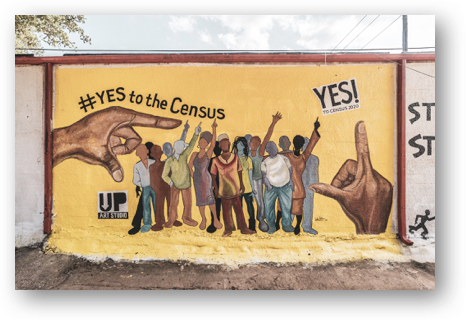 One of the biggest challenges in producing murals is finding the walls. This is especially challenging for the Census, because we had culturally-specific messages for different parts of town.

In this post, I’m going to take you behind the scenes and show you how we used data to help Lopez Negrete and the City of Houston find the best locations for these Census murals.

Below are a few of the key principles that came out of our Census 2020 mural campaign. We hope that this data-informed approach can be applied to other social good campaigns long after this Census ends.

Where will the Census 2020 campaign have the biggest impact?

The census is a once-in-a-decade opportunity for every resident of the United States to be counted. This count is extremely important because it helps determine federal funding for a variety of programs, and helps inform new political boundaries and subsequent representation.

Historically, however, the census has missed – or undercounted – certain groups more than others. These “hard to count” groups include renters, children, people of color, and immigrant communities.

In other words, based on our demographics, Houston is hard to count.

Our Census 2020 campaign team wanted to create murals that spoke directly to these undercounted groups, reinforced a positive message about Census 2020, and reflected the racial and language diversity of Houston’s population.

In particular, we wanted to reach Hispanic/Latinx, Black, Chinese, and Vietnamese communities, as well as Hindi and Urdu speakers, the LGBTQI+ community, and persons with disabilities.

Thankfully, the Census Bureau collects and provides data on many of these communities through its annual American Community Survey. With that data, we were able to estimate the neighborhoods where these Houston residents might live. This allowed us to figure out where the murals should go, and what they should say. 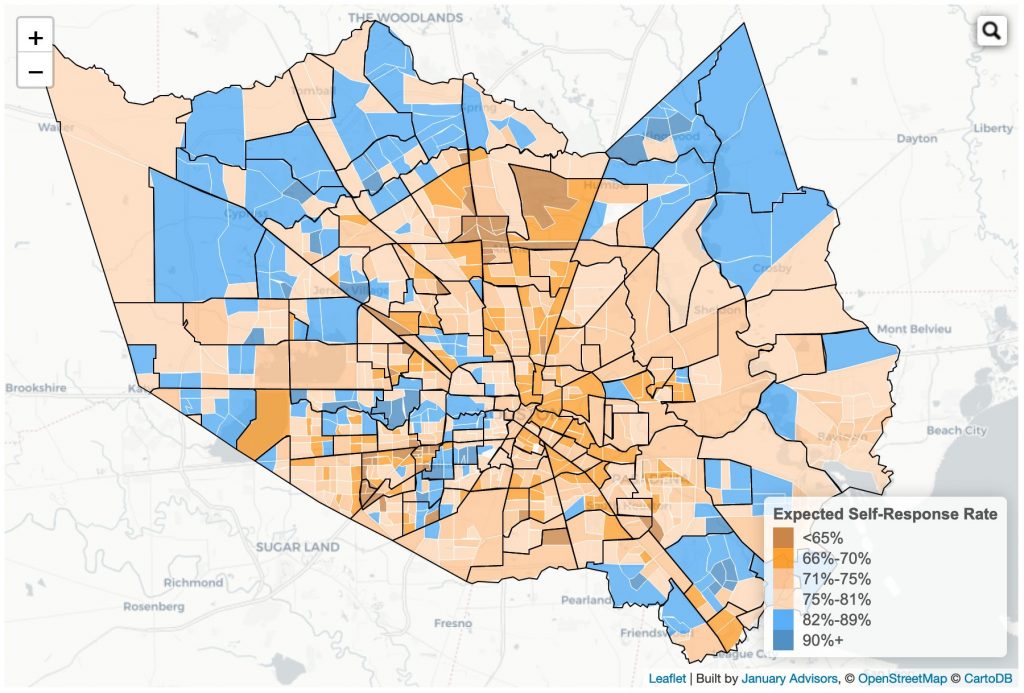 Map of expected self-response rates for Census 2020 in neighborhoods across Harris County. The areas in dark orange are where fewer residents were expected to return their census form.

It’s not enough to simply generate a map and hand it over. We wanted to make sure that the Census 2020 team could use their expert neighborhood knowledge to explore our initial findings and use it as a guide for finding the perfect mural locations.

After collecting all the data, we created an interactive map that allowed our Census 2020 campaign team to identify mural locations and drill down to see the social and demographic characteristics of the residents that live in the area. You can explore this interactive map for yourself here.

The interactive map shows the expected and current self-response rates (i.e. the number of households mailing back their census forms), and lets you summarize activity by neighborhood and administrative boundaries, such as the City of Houston’s Super Neighborhoods and city council districts.

The map also lets you filter census tracts by their expected self-response rate, as well as areas with high concentrations of undercounted communities. This helps direct the limited campaign resources to the neighborhoods that need to hear the Census message the most. 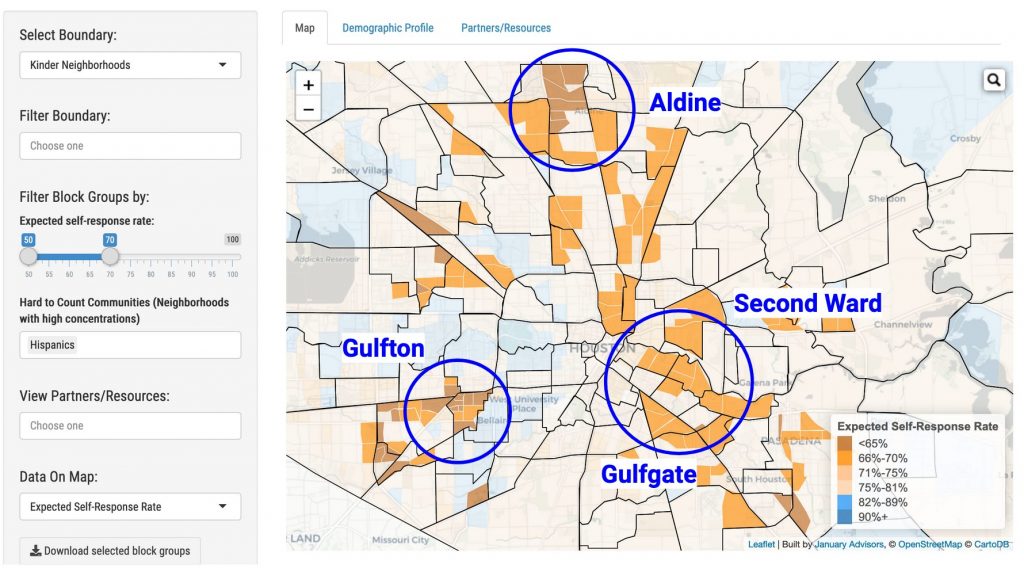 January Advisors built a Census 2020 mapping tool that allows partners to target resources and outreach efforts, like the mural campaign, to neighborhoods based on community characteristics.

For instance, when we were evaluating the best locations to reach Latinx communities, we looked at areas that had an expected self-response score below 70% and high concentrations of Hispanic/Latinx residents. The neighborhoods that stood out were Gulfton, Second Ward, Gulfgate, and Aldine.

In order to make the most of these murals, we were looking for ways to reach multiple communities with a single mural. Using this neighborhood-level data (and a little local knowledge), we worked with the team to identify areas with overlapping audiences.

For instance, the City of Houston wanted a flagship mural for the Census 2020 campaign to be near the center of the city. But rather than locate the mural Downtown, our team suggested the Montrose neighborhood.

Why? Montrose not only has high foot traffic and visibility, but it also has a high share of young people, renters, and at-risk LGBTQI+ residents – three groups that have historically been undercounted on the census. 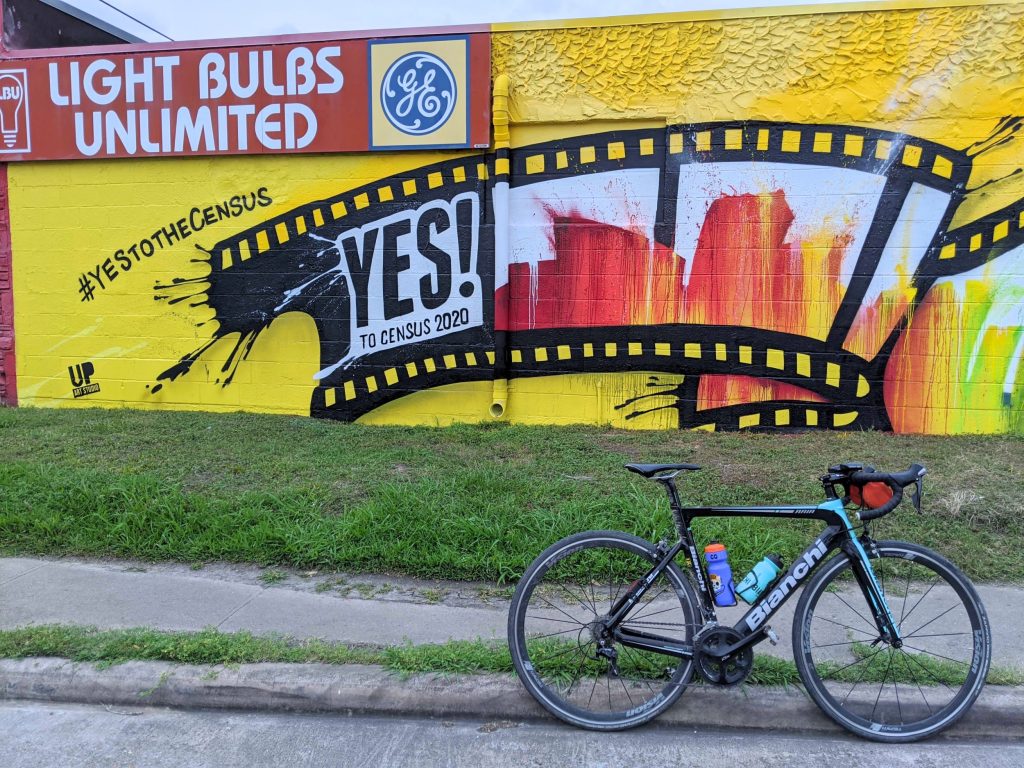 Maps are the beginning, not the end

We make a lot of maps at January Advisors. We always warn our clients that maps can be deceiving. In particular, areas that are geographically large don’t always have large populations. Often, neighborhoods that are smaller on the map have more people.

It was really important to keep this in mind on our Census 2020 mural campaign. Placing a mural in an sparsely populated area, even if a large share of residents are expected to be undercounted, wouldn’t be as effective as placing the mural in a densely populated neighborhood where many more people will see it.

So we took a close look at the population sizes of the neighborhood in our analysis. For example, we looked at both Gulfton and Second Ward as potential homes for a Spanish-language mural. Both neighborhoods have similar shares of Hispanic residents (74%) and had low expected self-response rates (63% and 69%, respectively). Both neighborhoods are also geographically similar in size.

But Gulfton’s Hispanic population is more than three times the size of the Second Ward. From the standpoint of total reach, Gulfton was the clear winner. 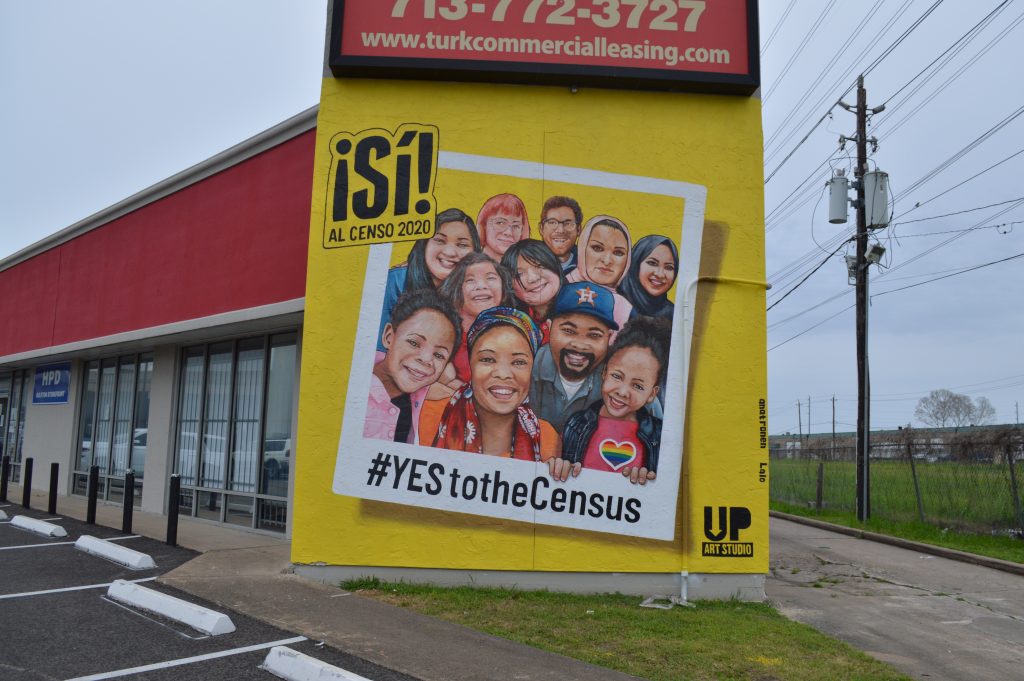 After we finished our analysis and made our neighborhood recommendations, our partners at Lopez Negrete Communications worked with a network of community partners to go the distance, locate actual sites within those neighborhoods, and produce the murals. They reached out to local partners and city council members to find willing businesses and building owners who were willing to host a mural.

This process got us thinking about taking an additional step forward. How can we have a data-informed approach to identify not just neighborhoods, but also potential mural sites? If you have a social good campaign and you’d like to collaborate on finding mural locations, please send us a tweet to us at @januaryadvisors or send us an email. In the meantime, fill out your census form here if you haven’t already!