This post looks at five key findings from the study. You can read the full report here and dive into the data on our interactive data dashboard here.

Across the entire 60-county Gulf Coast region under disaster declaration, an estimated 98,200 veterans applied to the Federal Emergency Management Agency (FEMA) for Individual Assistance aid. Of those, approximately 18,100 were post-9/11 veterans (those who left the service after 9/11/2001).

In Harris County alone, the most populous county in the Greater Houston region, some 36,000 veterans and 7,500 post-9/11 veterans applied for FEMA Individual Assistance. 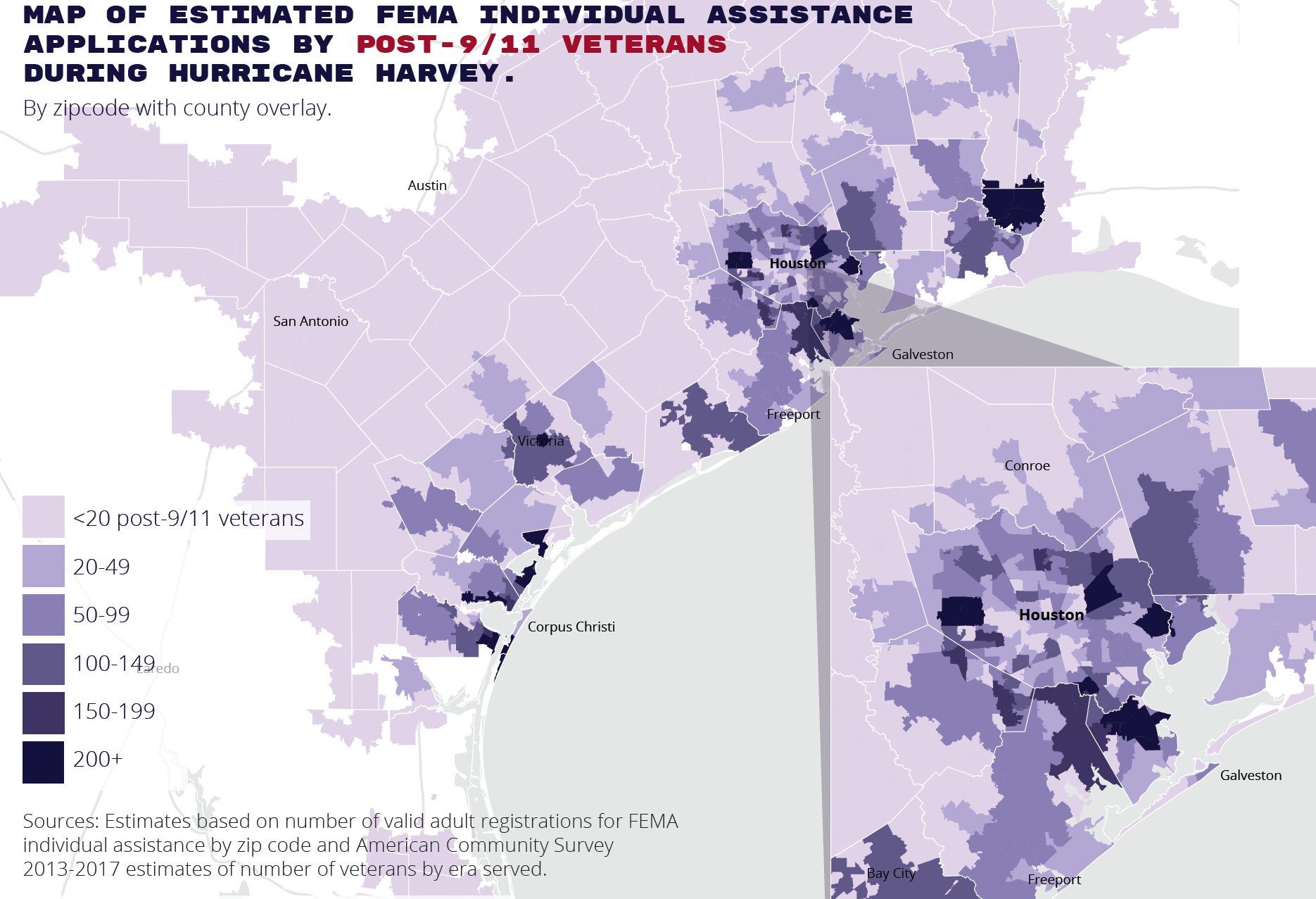 Veterans in the Greater Houston region were also at greater risk of being affected by the storm than the general population. An estimated 31% of all veterans and 29% of post-9/11 veterans applied for FEMA Individual Assistance compared with 22% of Greater Houston residents.

60% of veterans surveyed sustained damage to their homes and belongings.

In the weeks after Hurricane Harvey, Combined Arms surveyed nearly 200 existing and incoming clients to better understand their social service needs. Housing was the primary concern. Nearly 6-in-10 respondents reported that their residence sustained minor or major damage during Harvey, including half of post-9/11 veterans. Twenty-seven percent of respondents were in need of long-term housing and around 10% needed short-term, emergency shelter (at the time of the survey).

Food was another top concern, with 57% percent of veteran respondents saying they needed food for their families after the storm. Disaster food stamps was also the number three top request by veterans to United Way’s 2-1-1 call center in the three months following Hurricane Harvey.

But the range of services requested by veterans affected by Harvey went well beyond the traditional needs after a natural disaster. Many veterans were also looking for career assistance, financial help, volunteer engagement, homelessness assistance, and veteran benefits assistance.

88% of veterans surveyed did not have flood insurance before the storm (and few have gotten it since).

A major area of concern is that nearly all respondents (88%) to Combined Arms initial survey after the storm reported that they did not have flood insurance. Flood insurance mitigates the financial impact of storm damage and helps people recover more quickly.

Without flood insurance, the impact of a storm like Harvey can be severe. As one survey respondent put it: “Due to lack of flood insurance, the repairs to my house, property loss, and vehicle damage significantly impact my savings. Prior to the flood, my home and car were completely paid for (debt free).” 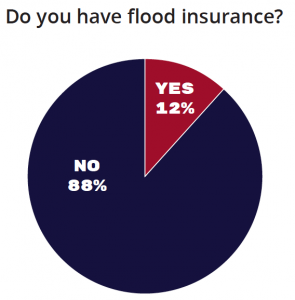 In July 2019, as part of this study, Combined Arms surveyed 107 veterans affected by Harvey about the recovery process. Two years after Hurricane Harvey, two-thirds of veterans surveyed (66%) still did not have flood insurance.

One clear policy recommendation is to have nonprofits and social workers who serve veterans to ask them if they have flood insurance and be trained to assist veterans in signing up for the National Flood Insurance Program.

Veterans stepped up to serve their community.

The 2019 Harvey Recovery survey conducted by Combined Arms also revealed the resilience of the veteran community in Houston. The majority (61%) of veterans surveyed reported that they volunteered to help family members, friends, or other people through clubs, churches, and other organizations. Thirty-eight percent volunteered with at least one organization for the first time.

Nearly 1-in-4 veterans also reported they had become civically engaged on flooding issues, including attending a town hall, talking to a government official or representative, or voting on a bond proposal.

Many veterans are still in need of services and support.

Our study also found that many veterans in Houston are still recovering from the effects of Hurricane Harvey. Approximately one-third of respondents (34%) reported that life was “not back to normal” since Harvey.

Home repair was the top area of continued need and support. Of all veterans surveyed, 59% reported that they experienced some amount of damage to their home or apartment during Harvey. Two years later, 44% of those veterans who experienced home damage still had unfinished repair work that needed to be completed.

Transportation was another key area of need. Approximately 35% of respondents reported that they or a member of their household had a vehicle damaged or lost during Harvey. Some 29% of veteran respondents whose car was damaged during the storm had not replaced it by 2019 and were still in need of one.

More than 1-in-8 respondents (14%) reported that they were still in need of mental health services.

These are just some of the key findings from our report. You can read the full report below and explore the data yourself on our interactive data dashboard.