Over at Sketch City, we’ve been working with various governments in the Houston area to introduce the idea of participatory budgeting. We’ll post more about our findings in a few months. In the meantime, I received this email from the Mayor’s office:

Three Houston Parks and Recreation Department projects are competing for a $20,000 grant through the Parks Build Community initiative! You get to choose which one will win!

The National Recreation and Park Association, Disney Citizenship, ABC Television and ESPN are collaborating to revitalize parks across the U.S., including a park project right here in Houston through Parks Build Community! This Earth Month, one of three local park projects will receive a $20,000 grant and your vote will help choose it! The park projects you can vote for are:

Ingrando Park: If chosen, the Futsal Court at Ingrando Park will repurpose an unused tennis court into a new mini-pitch soccer court for players of all ages. The mini-pitch court will benefit the Soccer for Success program, an initiative of the U.S. Soccer Foundation in partnership with the Houston Parks and Recreation Department. The initiative engages low-income, at-risk children at city parks and schools in youth development opportunities through the game of soccer.

Herman Brown Park: If chosen, the Fruit Orchard and Community Garden at Herman Brown Park will provide a half-acre, fenced garden with ten 4′ x 6′ raised vegetable beds, a fruit orchard, on-site access to water, and a tool shed for the use of area neighbors and students in the Furr High School Green Ambassadors Program.

Houston Urban Wildlife Refuge Partnership: If chosen, this project will benefit programs at two Houston community centers. After school and summer programs at the Judson Robinson, Jr., and Carverdale Community Centers will involve children in environmental education, conservation and outdoor recreation through the Houston Urban Wildlife Refuge Partnership, which coordinates stewardship activities and the creation of nature play areas for an improved quality of life.

You can vote for one of these programs once a day throughout April! Help choose which Houston project wins the $20,000! Vote daily at: www.NRPA.org/BeInspired.

This contest is important for three reasons:

Hopefully this contest can provide the kind of pilot experience that will lead the City of Houston towards broader adoption of participatory budgeting.

Jeff is passionate about data. He founded January Advisors and Sketch City, and serves on the board of the League of Women Voters of Houston. Read his full bio on LinkedIn.

First Results of the CDC Eviction Moratorium in Tarrant County

Visualizing one year of remote work 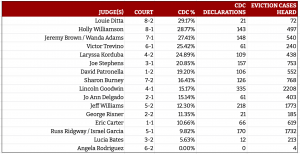 First Results of the CDC Eviction Moratorium in Houston