Don’t worry, Rice Village isn’t like that bar without a sign. It’s not exclusive, and it’s not hiding from you. The neighborhood remains the same old destination for boutique shopping and great bars that Houston has enjoyed since the 1930s. But remaining the same isn’t one of Houston’s strengths. Up above the dress shops and taverns, tucked away in the canopy of second floor executive offices, there are startups working on what comes next.

When my company moved into the area last year, it felt like we stumbled across a secret startup world that was hiding in plain sight. Now that we’ve gotten to know a dozen companies in the neighborhood, it’s clear that Rice Village has all the ingredients to attract high growth startups. This blog is my first attempt to explain why.

We met up with Yuji, the New York Bureau Chief for Yomiuri Shimbun, on a chilly winter morning in Rice Village. Yuji was in town chasing a story about the shifting demographics of Texas, and how that changes our politics, too. I invited a few entrepreneur transplants to join us for lunch, hoping they would give him an honest earful about our growing startup community compared to the coasts. We met on a streetcorner in Rice Village and picked a restaurant on a whim.

Right inside the door, there were two startups holding separate lunch meetings. Our group fanned out for handshakes and backpats and smiles. Over the last year, these encounters seem to happen frequently. There are a lot of entrepreneurs in the neighborhood.

“I moved back to Houston to start my business,” Bryan Hassin told Yuji as we reconvened around our table. “It has a low cost of living, lots of friendly people, tons of talent, and it still has that up-and-coming cultural feel.  It’s a great place to uncover opportunity.”

Bryan is the CEO of Smart Office Energy Solutions and an Entrepreneur-in-Residence at Rice University. Along with Amitav Misra, he brought the Cleanweb organization to Houston, and was an organizer of the Cleanweb Hackathon in September. Bryan is part of a growing group of civic-minded entrepreneurs who are leading Houston’s startup community into 2013.

Still, out-of-towners are usually surprised by Houston’s activity. We’re known as a sprawling yawn of a southern metropolis, with strip centers lighting the way to an edge city in every direction. But we’re also a city of continued economic and cultural growth.

Houston keeps attracting out-of-town professionals who want a short commute, a vibrant urban core, and affordable housing. So our city is contracting to the tune of infill. This is great for real estate developers who, in the absence of restrictions, will tear down a single 1930s bungalow and and build eight townhomes on the same lot. It’s very sad for history. On the bright side, it’s not long before those townhomes are filled with doctors, engineers, and other skilled professionals who came to Houston for their jobs. (don’t worry: we try to save the magnificent trees)

There’s evidence of our current boom just about everywhere. Count the cranes and construction workers. I’ve been here for three years. Change is a way of life. We are forever turning this city into our vision of home.

But Rice Village is a little different. It’s Houston’s very own college town, surrounded by beautiful neighborhoods that resist change. They fight what they can see, like infill and nightlife. And their battle slows down development, preserving parts of Rice Village as a charming relic of Houston’s past.  But nothing is permanent in this town, and the neighbors are about to lose.

Other cities have iconic symbols of their startup community. Some of these symbols are established over years of innovation, like Sand Hill Road in Silicon Valley. Some are assembled quickly by engaging all of the stakeholders in the entrepreneurial stack, like 1871 in Chicago or Geekdom in San Antonio. And some, like Tony Hsieh’s series of projects in Las Vegas, are brute force attacks that have the potential to transform the city.

Over the last nine months, as Houston’s greater startup community starts to coalesce, there have been rumblings about our startup symbol.  Many want to transform existing institutions into startup community hubs, and others want to build new facilities.  And while I think we’re still in the early stages of community building, I think we will accelerate quickly.  Houston has plenty of entrepreneurs — certainly more than enough to support a grand vision.  But our city is decentralized and fragmented. We don’t really know our own potential, and it’s hard to imagine what things will look like as we get more organized.

That’s why Rice Village is a good start. It’s an existing community where any entrepreneur can show up and set up. No individual business has singular importance. And by weaving in office space around an established retail core, Rice Village feels like the center of a small, boutique universe. 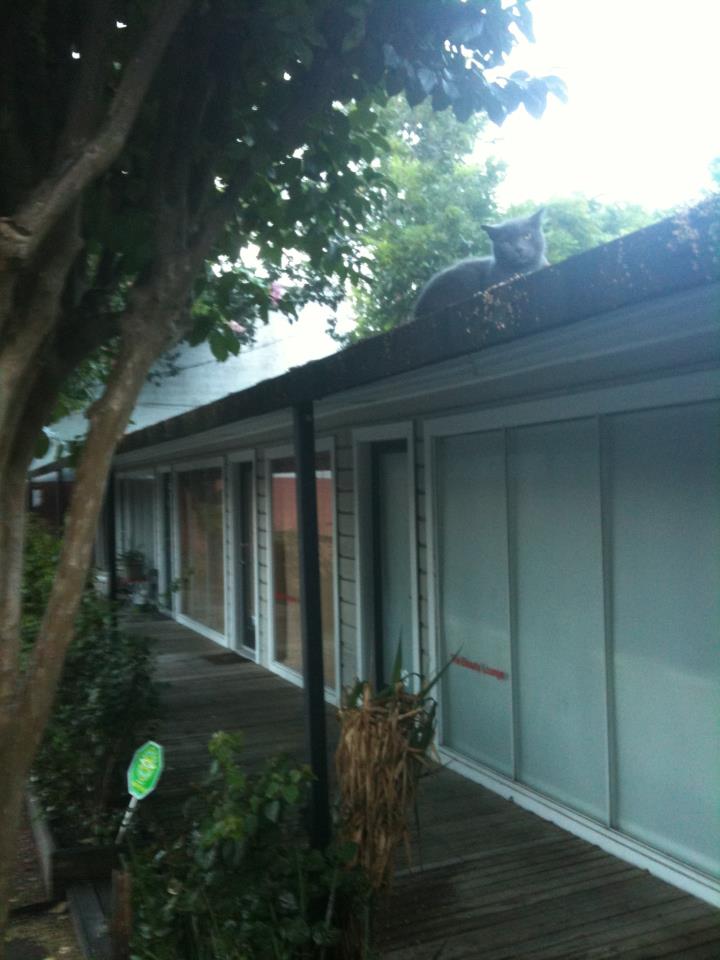 Just hanging outside of our office on a rainy morning. Business cat means business.

“Where else would I be?” asks Sameer Soleja, CEO of Molecule Software. Sameer’s company graduated from the first class of Surge Accelerator last June. Shortly afterwards, he raised a seed round and set up at 2444 Times Blvd. “We didn’t want to be in a building that reminded us of our old jobs,” he said. “It’s just not the right environment for a startup. I want to open my door and step into the street.”

In the executive office spaces dotting Rice Village, a software startup could fit a team of four in an office that costs, on average, about $700 a month.  (Don’t take my word for it — ask the guys at TheSquareFoot, a startup that took flight in the second floor coworking space at New Living).  There are plenty of one year lease options (instead of the typical three years), so as the startup outgrows the office, they can move into one of several Class B office buildings around the corner.

But for every established startup, there are many more aspiring entrepreneurs. These people don’t need a typical office. Many of them are tied to their laptop, and they’re looking for a productive and stimulating place to work.

They find a home at Platform Houston, a 5,000 square foot coworking facility at the corner of Times and Morningside. Platform opened its doors in October, and it fills the need for a low-cost, public workspaces that are a little classier than a coffeeshop.

Matt Olds, one of the four co-founders, came to Houston from New York where he spent a decade opening restaurants in up-and-coming neighborhoods. In addition to renovating and opening Platform Houston, his group will be opening a wine and cheese shop across the street.

“Houston has so much potential,” Olds said. “But lots of people here only see what’s directly in front of their face. We’re creating a place where they can come together.”

After a soft launch in the fall, Platform Houston has already hosted several lectures, social events, happy hours, and even a hackathon. Eventually, Olds and his partners hope to create a vehicle for investing in local startups, like an accelerator program or an angel fund. But community comes first. “We’re learning more about the startups here in town, and it’s exciting,” Olds said. “We’re still getting a lay of the land, but Houston’s potential is undeniable.” 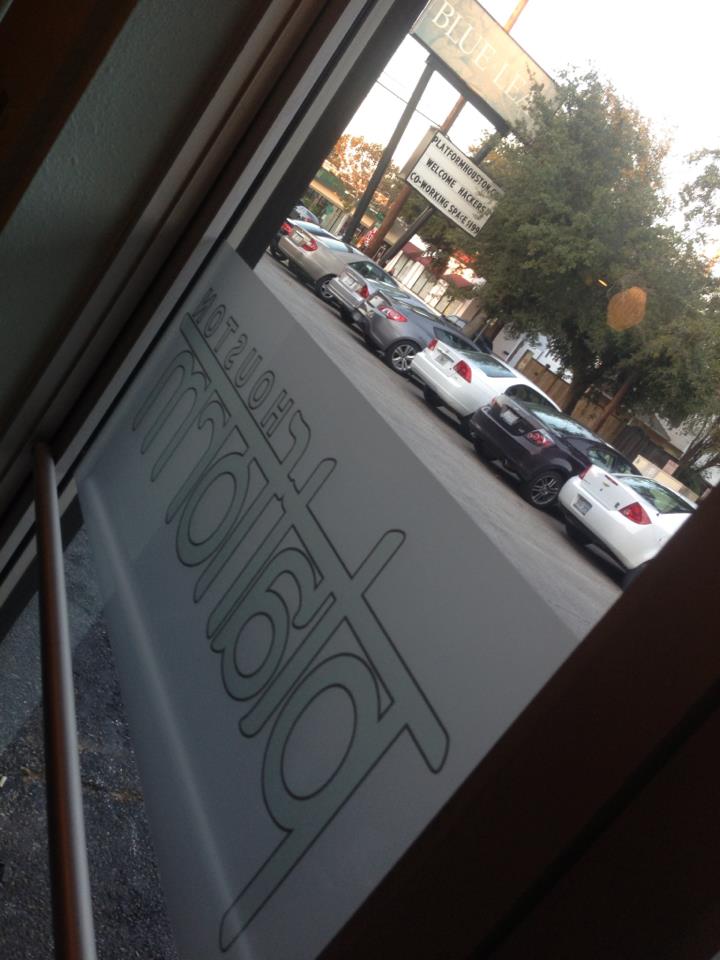 In fact, the winning team of the most recent Houston Startup Weekend has been camping out at Platform for the last few weeks, making the most of those free memberships. “This is a great neighborhood,” said James Wroblewski, co-founder of PermitMe. His company aims to simplify the city permitting process for new businesses. “I get to meet all sorts of people who come in the door, and it’s refreshing to know that there are lots of startups facing some of the same challenges that we are,” he said.

While Platform nurtures new technology startups, Rice Village boutique PH Design Shop nurtures aspiring product designers. Students in the University of Houston Industrial Design program are showcasing their work this holiday season, and part of the process is leaning the ins and outs of commercialization. And as that program branches out with a focus on entrepreneurship, we’ll start to see new, complimentary talents in our startup community.

There are a few key ingredients to Rice Village’s rise:

Eventually, if Rice Village continues to be a hospitable place for entrepreneurs, it might resemble some of the dense startup clusters in other cities like N3RD Street in Philadelphia.

But it doesn’t have to be limited to Rice Village. Our city has thousands of entrepreneurs, and lots of hospitable neighborhoods. There are smaller startup communities throughout the city in neighborhoods like like White Oak, EaDo, Midtown, and Montrose. They cater to different kinds of entrepreneurs.  But that’s another article entirely.

So as the “icon” discussion continues to unfold, I think we should take a cue from Houston’s entrepreneurs.  They just do.  The organic rise of startups in Rice Village — and across the city — proves that no institution can control the startup community.  Our community cannot be master-planned.  Under the right conditions, we self-assemble.  All we really need is encouragement. 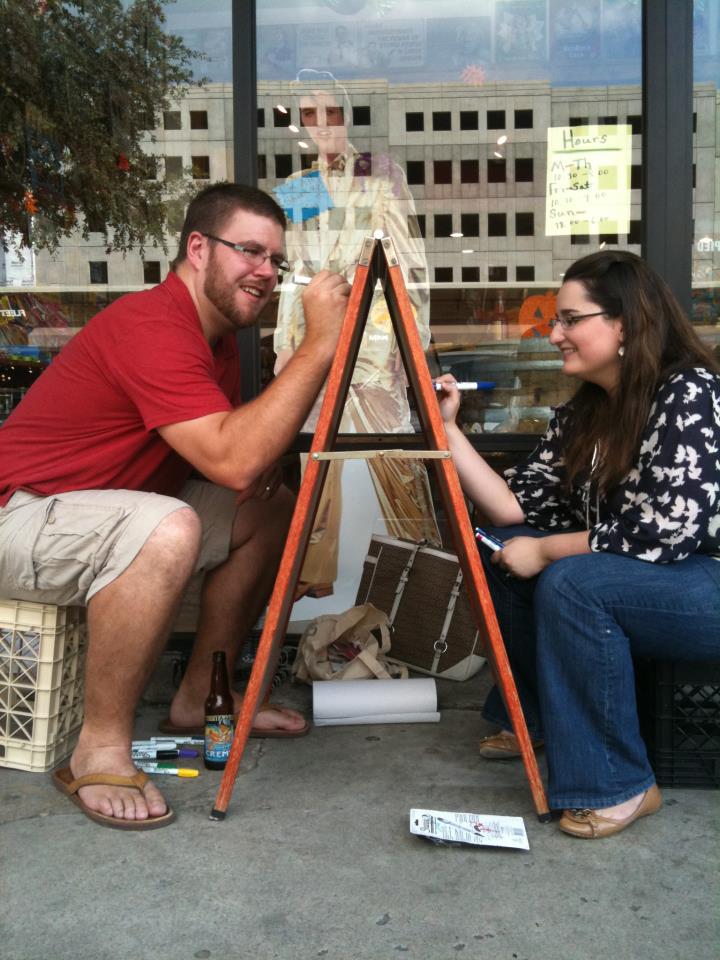