Ballots, Bao, and Brainstorming: My Summer with January Advisors

Less than 6 months ago I woke up and realized that although I had lived in Houston for nearly two years, I could count on one hand the number of people I knew in Houston that weren’t affiliated with Rice. Although I felt connected to the city though bike rides and a love for exploring, I knew that if I really wanted to be a part of Houston, I would need to get to know the people, the politics, and the culture. There are a lot of internships in Houston that would allow me to become more involved in the community, but I also wanted to do something that would leverage my passion for technology and design. That was when I was introduced to January Advisors.

Looking back on it, this summer seems to have gone by incredibly quickly. In the span of 9 weeks, I’ve built a mobile public opinion polling system, designed a series of coasters aimed at increasing voter turnout, created a small VOTE mural, and launched a product design firm. I’ve met artists, journalists, politicians, and engineers. I’ve discovered the wonders of Fat Bao, Shiva, Carter and Cooley’s, and countless other restaurants. Most importantly, I’ve found a community of people that are working hard to improve the city I now call home. 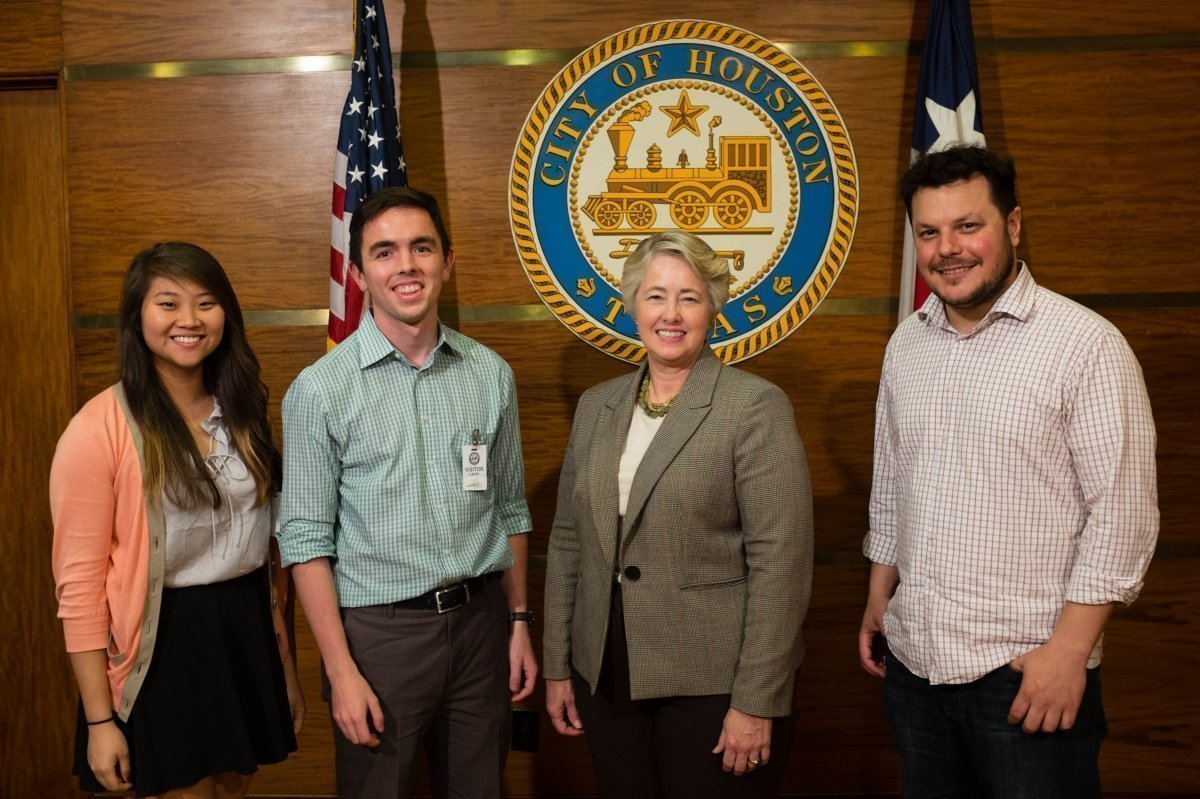 This summer January Advisors has partnered with the League of Women Voters, Rice University, and the Black Sheep Agency to tackle a series of project aimed at “getting out the vote” or raising awareness that 2015 is an election year. Houston historically has had abysmal turnout rates at the polls, with less than 1 in 5 registered voters actually casting a ballot in the last open mayoral race. To combat this apathy, we came up with a variety of projects aimed at using innovative methods to remind Houstonians that their votes really do count. 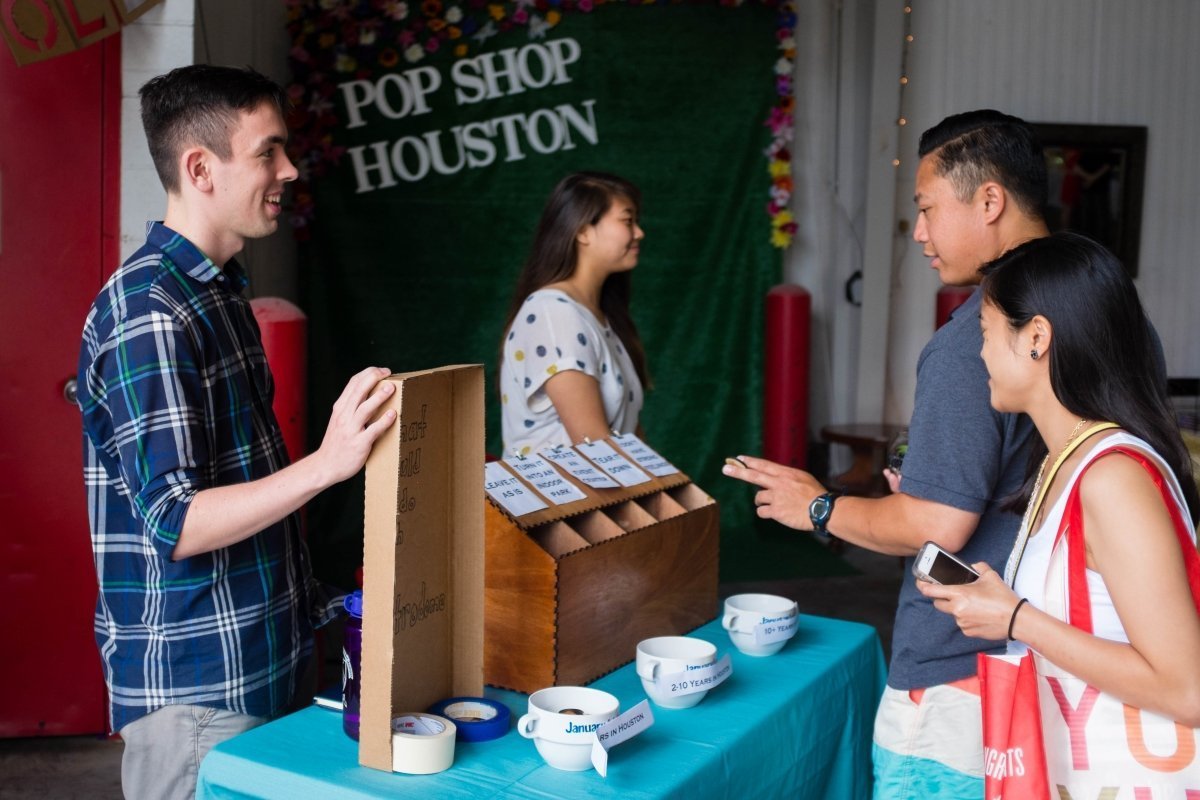 When Jeff first pitched these project ideas to me at the beginning of the summer I was extremely excited. Listening to the scope of the ideas, it was clear to me that this was a chance for me to leverage some of my strengths in engineering and design to solve problems that lay outside the traditional scope of engineering. Instead of being given clear instructions and specifications on what exactly to build, I was given more abstract prompts and left to use design thinking to come up with a solution. There were three main tasks: create a method of quickly collecting public opinion in a neighborhood, design coasters that delivers political information into a nonpolitical space (such as bars and restaurants) and measure their impact, and create a sign that says both VOTE and also evokes a sense of Houston. 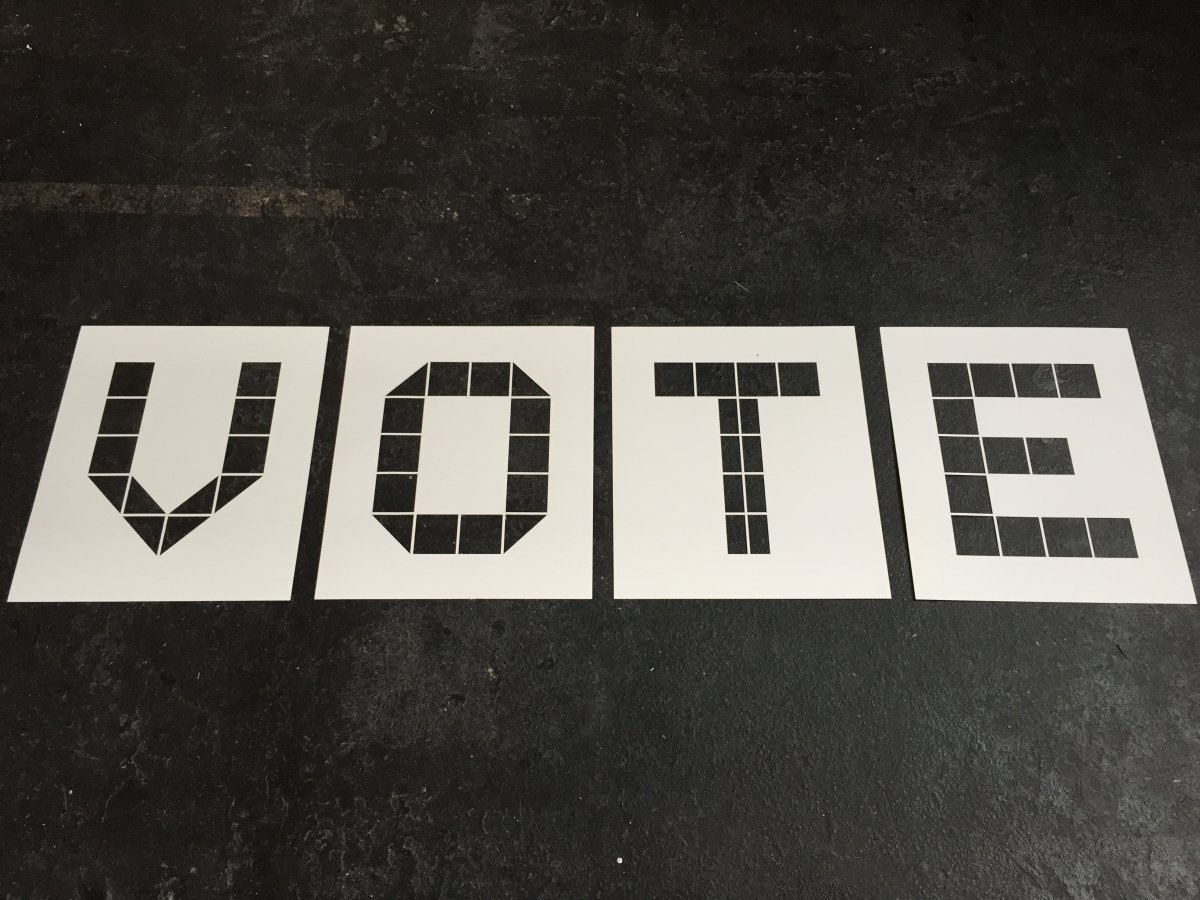 The first step in the design process is to understand as much about the context of the problem as possible, so that when one goes to brainstorm one has the knowledge to use for solutions. While this wasn’t very difficult for the polling prompt and the mural prompt, I quickly realized that I did not know very much about how Houston works which meant I had a lot of work to do for the coaster project. I started by reading as many of Mike Morris and Kat Driessen’s Houston Chronicle articles as possible. I also listened to Houston Matters with Craig Cohen and even attended a mayoral debate in OST/South Union. I became so absorbed in statistics and data about Houston that I started to annoy the people around me with what became known as “not-so-fun facts”. That’s when I knew I was ready to brainstorm.

Brainstorming, in all honesty is probably the most exhaustive portion of the design process. The idea is to soak up as much contextual information about a problem as possible and then write down everything you can think of and sort through it later. I spent four days this summer locked in a room scribbling down ideas on notecards in 25 minute pomodoro sessions. By the end of the week, the entire room was covered in notecards like a scene out of A Beautiful Mind. I then spent the next few day sorting and filtering through all of the cards, and by the end I was able to find the six best ideas for coasters. 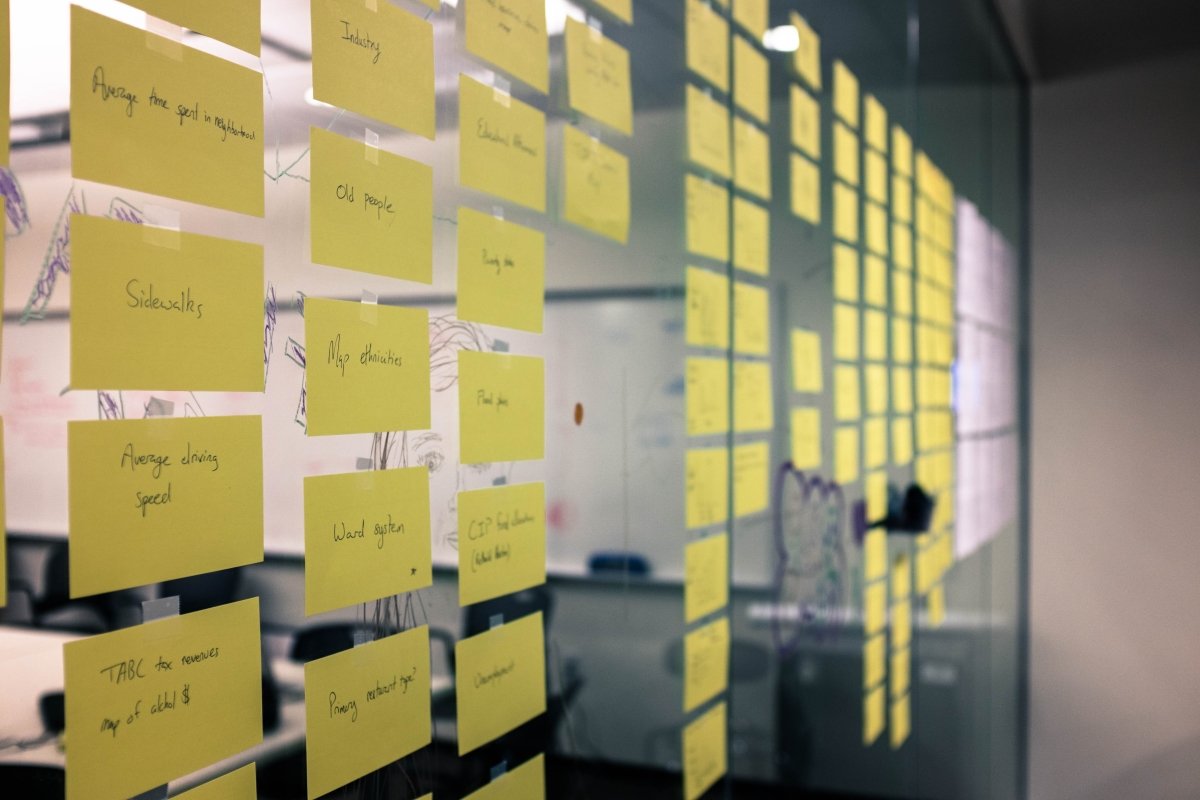 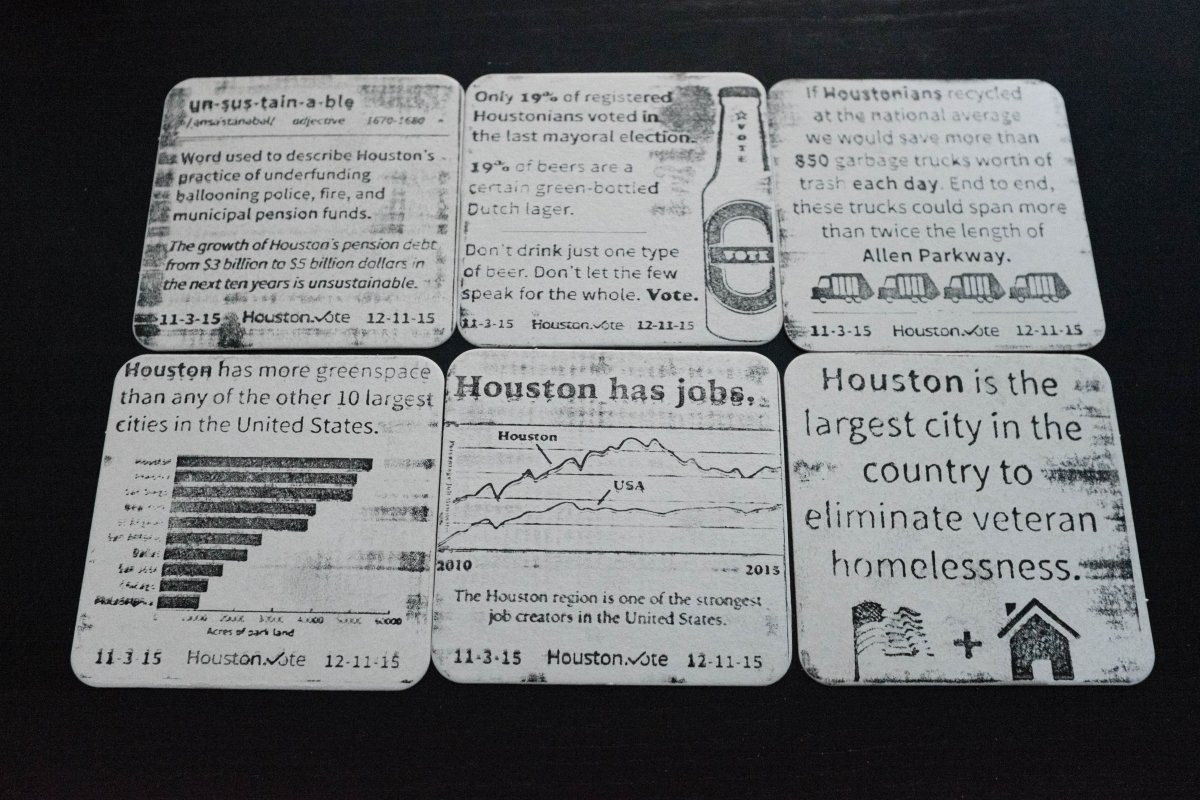 The final step in the design process is to create a prototype from one’s ideas and then iterate and improve until the solution satisfies the criteria and deems it good enough. For the public opinion polls, I created a ballot box and a series of tokens that could be used to answer simple questions about voting preferences. For the coaster problem, I used the same polling mechanism to measure the effect of the coasters on a brewery tour. The coasters themselves were created using a laser-cut stamp. For the VOTE Mural, I designed a stencil inspired by the blue tiles that mark many of Houston’s oldest streets. 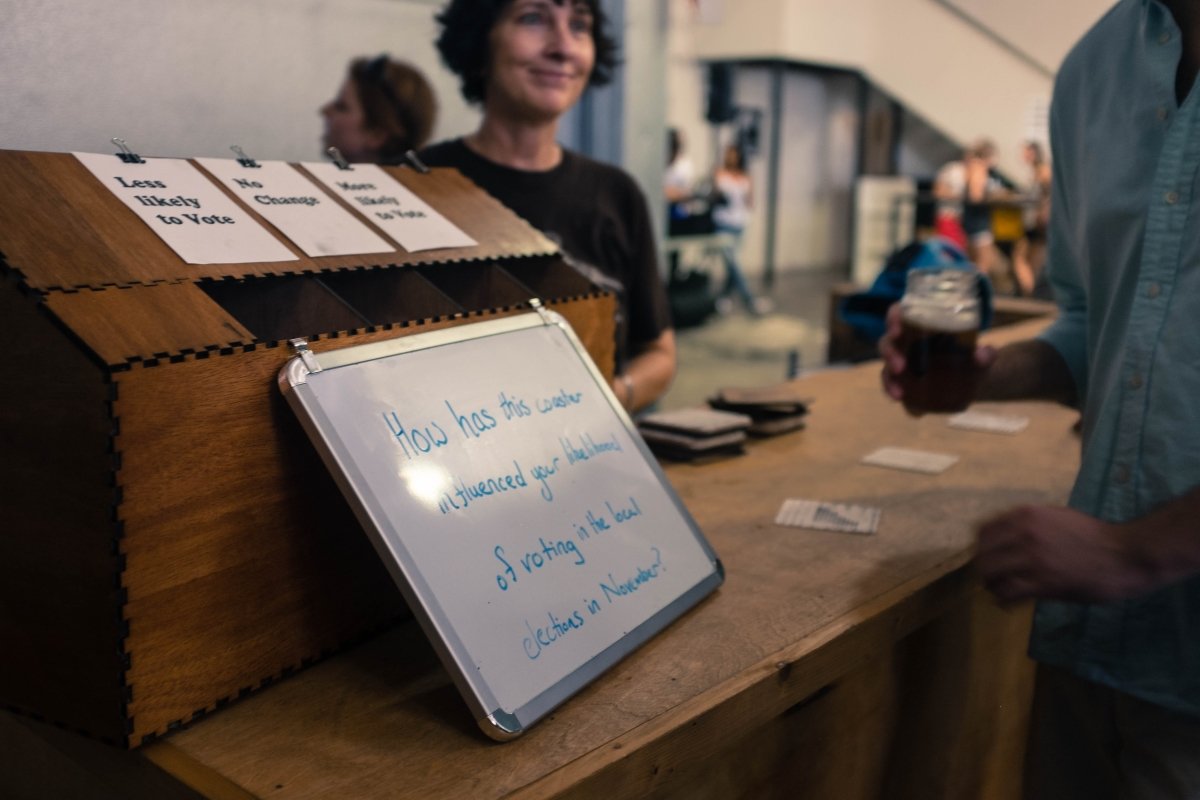 In parallel to all of this work about getting out the vote, I was working on another design focused project with Dr. Matthew Wettergreen of Rice University. While thinking about ways to visualize the display of data related to Houston’s voting population, we realized that many of the charts and maps were not only aesthetically pleasing, but they told a rich story of a facet of Houston’s history. With this in mind, we launched a design firm, Data Design Co_, that produces physical objects imbued with data. Our first product was a series of laser cut acrylic coasters that displayed the growth of Houston and Chicago over time. Each coaster displays a map of the city at a certain period in time, but when placed together one is able to look through the coasters and see how the cities have grown. 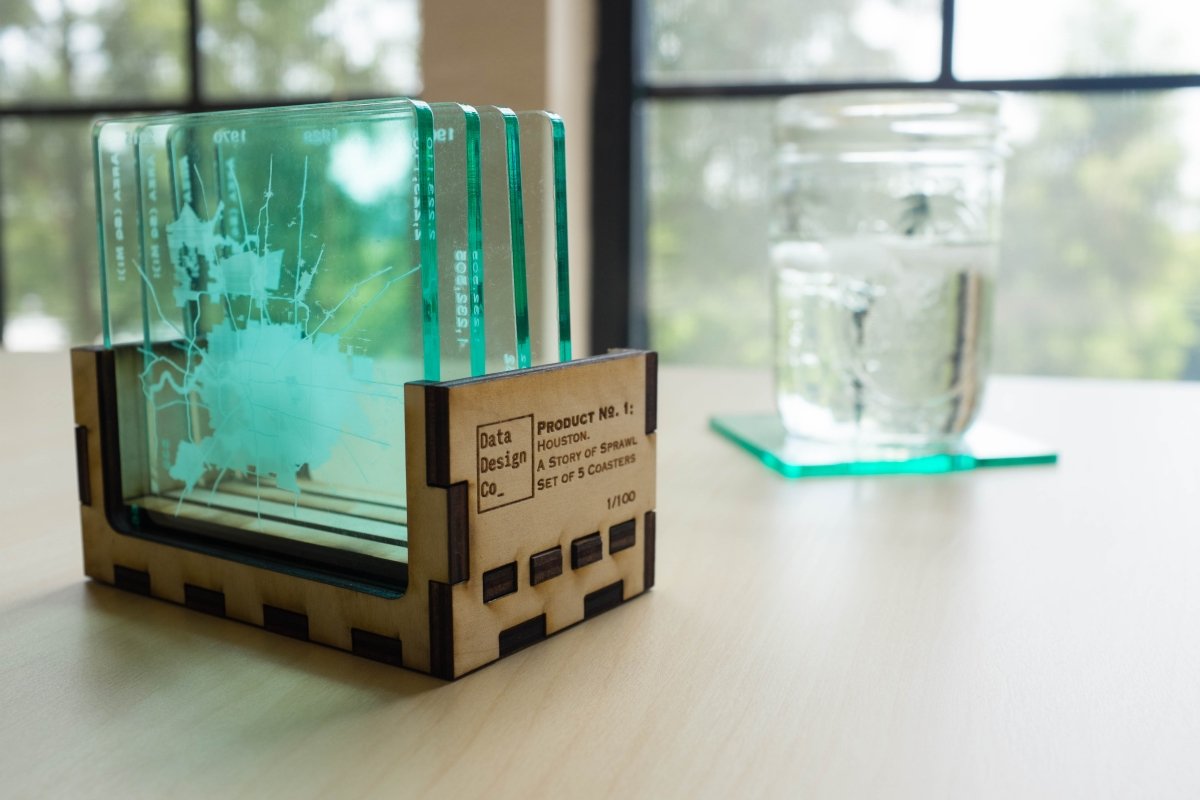 While I certainly gained a lot of experience using rapid prototyping tools such as the laser cutter at PostStudio, this was also probably the area that I had the most experience with coming in to the internship. Knowing about the limitations of the various manufacturing techniques certainly helped inform my designs, but the majority of my education this summer came from applying design thinking in unexpected ways. Being forced to apply techniques I had previously only used for technical problems to nontechnical problems expanded my mindset and helped me realize that approaching problems from a nontraditional angle can sometimes yield nontraditional solutions. Working with Jeff, Sach, Matt, and so many others left me with a much better sense of how to function in situations rife with ambiguity, and I know that being left to choose my own approaches to solving the problems they presented ultimately left me with a much greater degree of ownership over my solution. Most of all, I have really come to appreciate the perspective studying these problems has given me on the City of Houston. Houstonians are a diverse, optimistic, and pioneering group of individuals, and I am proud that I was able to work to re-engage them with their city.