There were six of us huddled around a pasta press, cranking dough as if our dinner depended on it. We were guests at a penthouse apartment overlooking the Texas Medical Center, and our hosts kept our drinks full. None of us had ever made pasta from scratch before.

It doesn’t take six people to make pasta. But with the AMRI fellows, every project is a collaboration. Every interaction is a learning opportunity. 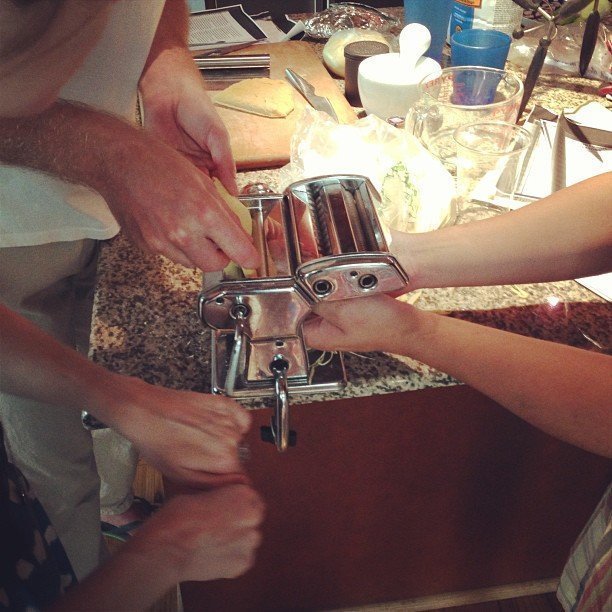 The Advanced Manufacturing Research Institute (AMRI) is a summer program that provides collaboration opportunities between makers in the open source community and researchers in an academic lab. Housed in #millerlab at Rice University, AMRI’s mission is to provide “mentorship, infrastructure, and research funding for promising young makers to pursue their interests using the scientific method.”

(if you are interested, the application deadline is May 15).

Historically, makers and academics don’t seem to mix. The DIY + open source ethos in scientific maker community can be seen, in part, as a response to the lack of open access to peer-reviewed scientific research. There is a resource disparity as well, with most science funding going to labs affiliated with governments, hospitals, and universities.

Dr. Miller kept his hardware research open source, and over time, his relationship with the maker community grew.  Nowadays, he is a core Rep Rap developer, a founding member of Hive76, and an Assistant Professor at Rice University.

But these different sources of learning never reconciled until he founded AMRI.  In August 2013, Dr. Miller brought in a couple of self-guided makers from the open source community, and he put them on scientific research projects.  He didn’t know what would happen next.

Guided by Dr. Miller and Dr. Matthew Wettergreen, the 2013 AMRI fellows produced some great work. You can learn all about their research here.

This year, AMRI is working on four awesome projects:

Project 1: e-NABLE 3D Printed Prosthetic Devices
In collaboration with the worldwide e-NABLE group, and Gloria Gogola, M.D. at Shriners Hospital for Children, Fellows will aid in the design, 3D printing, testing, and refinement of open-source prosthetic hand and finger designs. This unique fellowship will bring 3D printing into the clinical setting, working closely with Dr. Gogola and her patients in need.

Project 2: Selective Laser Sintering (SLS)
Fellows will augment and refine the open SLS design pioneered by Andreas Bastian last year. SLS machines typically cost $50k or more, we built ours for under $15k. This year we will focus on powder manufacturing and powder handling, as well as characterization of SLS parts via scanning electron microscopy (SEM) and mechanical testing. Andreas’ 2013 AMRI Presentation is available here.

Project 4: Open Source Ink Jet Printing of Bacteria
A continuation of Steve Kelly’s inkshield augmentation of RepRap motherboards to print living bacteria, Fellows will investigate fluid mechanics, python scripting, and multicolor printing to create interacting bacterial colonies on top of and within agar gels. Fellows will also learn how to insert genes of interest into bacterial colonies for protein production.

I can’t wait to see the awesome people who make it down to Houston this summer. After spending three months with last year’s AMRI fellows, both in the lab and at the pool, I have to tell you: there is something remarkable about these people and this program. The AMRI fellows don’t have academic pedigrees. They earned their spots in the lab through hard work and open source contributions.

In scientific research, it’s hard to fully understand the value of pedigree. There are advantages because of where a scientist went to school, or the impact factor of their Ph.D. advisor, or what kind of funding they have, or what kind of alliances they form. There are tons of little edges and a few big advantages that university researchers enjoy.

But researchers in the maker community are the underdogs. They don’t have access to the same resources and equipment. They’re not always surrounded by the scientific method in practice. Their motivations might be different, but their contributions to science are extremely valuable.

For three months this summer, some of the most talented makers in the world will be in Houston, feasting on big problems, and getting the support they need to further legitimize citizen science.