If you’ve been keeping up with the Census, you’ve probably heard about communities that are “hard to count” or “hardest to count.” It’s true that the Census has a hard time getting responses from certain populations, and there are some households the Census never tracks down at all.

But is it really fair to label some communities as hard to count? Is it their fault, as the term implies? Or are there other forces – policies and social conditions – that make it more difficult for certain communities to feel safe enough to respond to the Census?

Case and point is the citizenship question. The Trump Administration proposed adding a question about citizenship status on Census 2020. People from across the political spectrum are worried. They are concerned that simply asking about people’s citizenship status will cause many families to not respond out of fear that the government will use the information to target them or their family members for deportation.

In the end, this fear is a barrier: it makes an accurate count more expensive and less likely.

Texans cannot ignore this issue. In a previous blog, I estimated that around 1-in-3 Houston-area residents live with a non-citizen. If the Census misses even a small fraction of those households, it could cost the region millions of dollars in government funding.

In this blog, I wanted to explore the citizenship question and its potential impact on the undercount across Texas. In particular, I wanted to know:

Still, even documented non-citizens may fear disclosing their citizenship status on the Census. 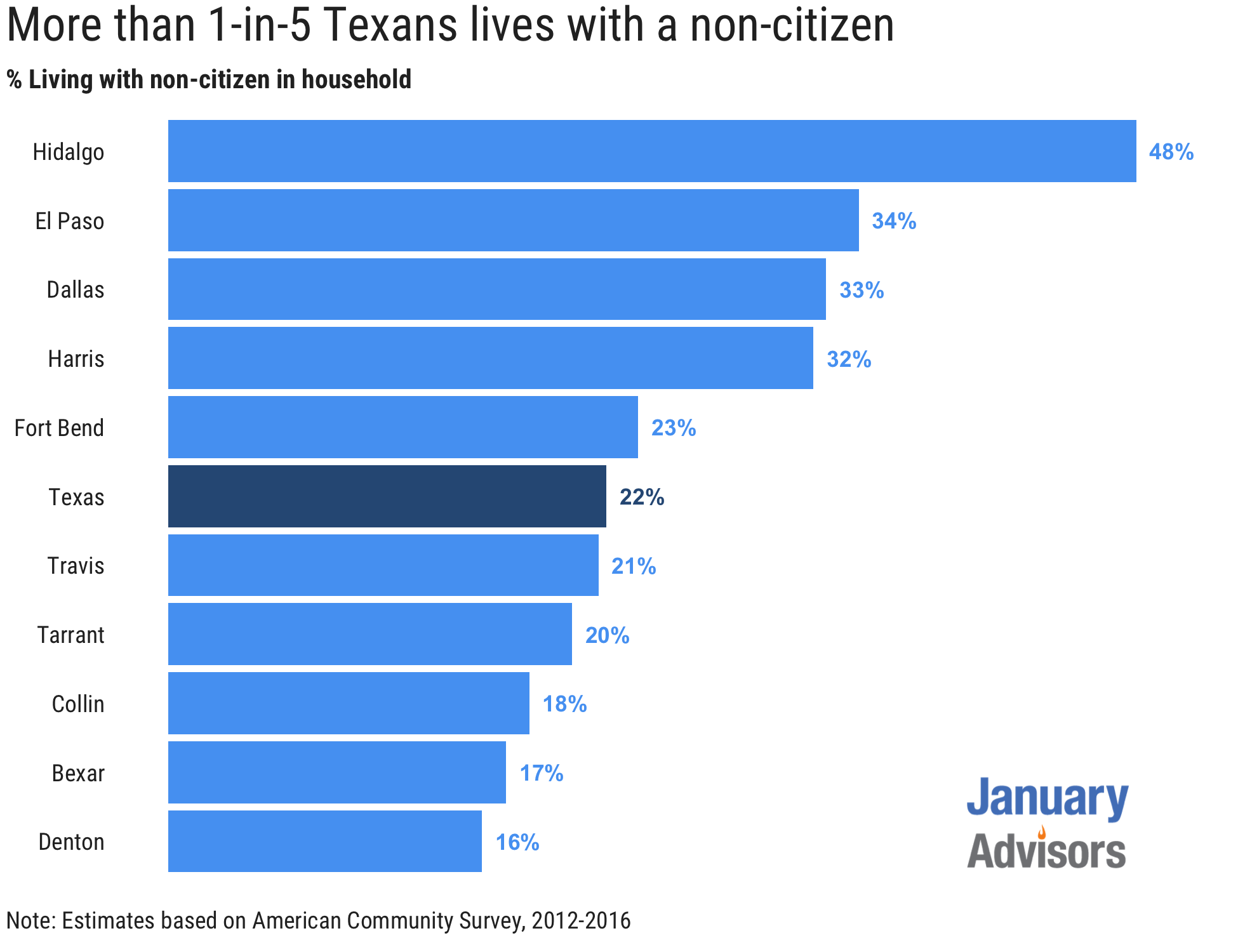 Census responses are based on the household. And the number of Texans who live with non-citizens is higher than the national average. More than 1-in-5 Texans (22%) lives with a non-citizen. That’s nearly 6.5 million people total.

The majority of households with one or more non-citizens live in urban centers across the state, but the risk of an undercount due to citizenship varies by county. For example, nearly half of residents in Hidalgo County and one-third of residents in El Paso, Harris (Houston), and Dallas counties live with a non-citizen. By contrast, fewer than 20% of people living in Collin, Bexar (San Antonio), and Denton counties share a household with a non-citizen.

The Cost of the Citizenship Question

How much could the citizenship question cost the state of Texas? A study by George Washington University estimates that Texas would lose about $1,500 per year for each person that is missed by the Census. The bulk of that money comes from Health & Human Services programs like Medicaid and CHIP – money we are paying in taxes but not receiving in services for our community.

In 2010, the Census estimates that it missed about 1% of the population nationwide. If we assume those numbers are the same for Texas, then the 2010 undercount would cost our state about $4.5 billion.

In 2020, if all non-citizens did not respond to the Census, that would lead to about $50 billion in lost funding.

And if all households with a non-citizen ignored the Census, it would lead to more than $100 billion in lost funding for Texas over 10 years.

Who Lives with Non-Citizens?

Of course, the citizenship question threatens some Texans more than others because not all demographic groups are equally likely to live with non-citizens.

Young children will be one of the hardest hit. In 2010, an estimated 7% of children ages 0-4 in Texas were to have been missed by the Census (compared with 1% of the general population). That share could be even higher in 2020: nearly one third of Texas children under 6 live with a non-citizen, compared to 21% of older children and adults.

The citizenship question may also discourage poor Texans from filling out the Census. Texans living in poverty are nearly twice as likely to be living with a non-citizen as those above the poverty line (36% vs. 19%).

Whatever the impact of the citizenship question on the Census count, it will almost certainly disproportionately impact communities that are greatest need of federal funding and assistance.

Accounting for the Undercounter

The citizenship question is not the only form of “enumeration suppression” making it harder for some Texans to be counted in 2020. Anti-immigrant rhetoric and policies – like the growing number of immigration arrests and deportations – are likely contributing to a larger climate of fear and mistrust of government among immigrant communities.

What effect will this fear have on an accurate census count?

I compared levels of immigration enforcement against the Census Bureau’s expected low response scores for 2020 among counties with at least 100,000 residents. These scores reflect the number of households that are predicted not to return the census form and require additional follow-up. It serves as a good proxy of where an undercount is most likely to occur. 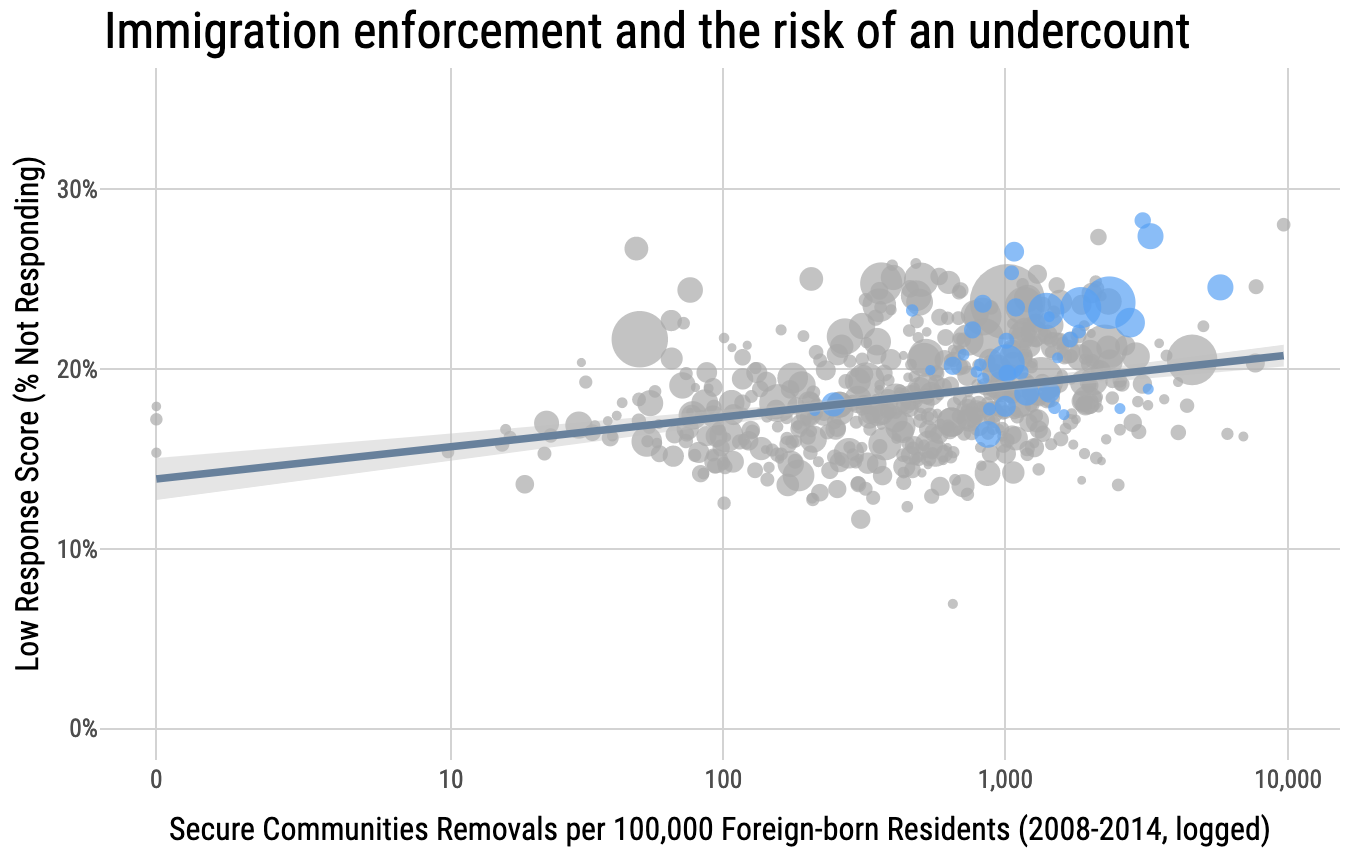 This relationship between immigration enforcement and low response risk is consistent even when I look at the subset of deportations of low-level criminal offenders (those not convicted of serious crimes). It also holds when I adjust for race-ethnicity, age, and socioeconomic characteristics of counties, as well as when all US counties are included.

To be clear: I’m only showing a correlation – not evidence of a causal effect. But it is in line with recent work by social scientists showing low levels of trust in government and avoidance of social safety net programs among Hispanics living in areas with high levels of immigration enforcement.

If we’re going to push back against the “undercounter” forces at work in Census 2020, we’re going to need to build trust in these at-risk communities. And that means doing more than merely crunching the numbers.

Fortunately for Houston, a newly formed group called Houston in Action is bringing together community leaders and groups from across the city to reach out to the communities most at-risk for being undercounted. Their data- and community-driven approach is innovative and should serve as a model across Texas.

Watch our recent webinar with Frances Valdez, facilitator of Houston in Action, in the video below and learn more about how you can help ensure that everyone is counted in your community!