Learning About Craft Beer (One Pint at a Time)

There were a dozen of us, elbow to elbow around the dining room table. It was August, it was hot, and we were about to drink a few test batches of a soon-to-open craft brewery in Houston.  Around me was a diverse group of young accountants, lawyers, graduate students, doctors — all brought together by their passion for craft beer.

Outside on the balcony, a few guys readied the growler. Back in the kitchen, our host Rassul Zarinfar poured tastes of a homebrew that he got as a job application from an aspiring brewmaster. It was 4 o’clock in the afternoon and I hadn’t eaten anything all day.

“Get ready for our first flight,” Rassul said as he entered the dining room with two handfuls of glassware. “We’re going to try several variations on Dodd’s Gingerbread Stout recipe. If we can get it right, this will be our Christmas beer and Dodd will be our Santa.”

Dodd poked his head inside from the balcony and gave everyone the thumbs up.

Rassul smiled and continued. “Before we get started, though, I want to answer two questions for you. Yes, it’s 11% ABV, and yes, you will get drunk.”

In the spring of 2011, Rassul founded Buffalo Bayou Brewing Company, a local craft brewery that is “fiercely and uniquely Houston.” (Full disclosure: I have a small equity stake in the business).  At the time of our tasting, Rassul had just signed a lease, and he was beginning the cumbersome process of permits and construction. Despite the red tape, he was optimistic about launching in the fall. So he wanted to perfect his recipes right away.  That’s why we were taking down flight after flight of thick ass stouts that no normal person would drink in the Houston heat. But these people were not normal people. They were beer nerds.

The last few years have been good to craft beer. The market has been growing in Houston and across the country. Several local breweries are diversifying and distributing their beer in kegs, cans, and bottles. St. Arnold’s annual Divine Reserve causes stampedes at Specs, selling out within minutes while latecomers scour Twitter for clues about a single or six pack. Even the service industry is growing: a husband-and-wife team up in the Heights launched BottleMark out of a garage, providing homebrewers with custom printed bottlecaps that will turn every beer into a brand. [quote style=”boxed” float=”right”]If we were on the Oregon Trail, I would have died of dysentery long ago.[/quote]

These trends validated Rassul’s instincts, but in the end, everyone around that table knew that he had to brew great beer. So we critiqued the variations. As the alcohol grabbed ahold of my liver like a cowboy at a rodeo, my companions stopped being doctors and lawyers and accountants. They became pioneers. They journeyed through new territory, using words like “mouthfeel” and “effervescent” to chart their course. I used words like “this tastes like vodka.” If we were on the Oregon Trail, I would have died of dysentery long ago.

Over the course of an hour, we tried ten varieties of Buffalo Bayou Brewing Company’s Gingerbread Stout. By Christmas, it was a universal hit. It tastes nothing like vodka.

When I met Rassul back in January 2011, I didn’t really understand the nuances of craft beer. To make matters worse, I liked pretty much everything I tried. I was just happy to have a beer with friends, whether it was glass of Dogfish 90 Minute IPA or a can of Miller Lite.

This would not stand. I had to learn more.

Some folks get their education from the chalkboard at the Gingerman over long, lazy happy hours. My schooling happened once a month on Sunday mornings. While my friends and colleagues slept off their hangovers, I made my way to Jerald’s house in Meyerland.

From the street, Jerald and his wife Shelli live in a nondescript, 1950s ranch house across from the bayou. But after passing through the front door, their home becomes a sweeping landscape of windows and light, barking dogs, football games, and laughter. Lots of laughter. Without wasting a minute, we grab plates and feast on bagels, lox, fresh fruit, and latkas — eyeing one another sheepishly while waiting for the dance to begin.

“Is ten-thirty too early?”

“I don’t think ten-thirty is too early.”

Then our fearless host grows tired of the deliberation, so he gets up from the table and unloads the refrigerator. Carefully, in the measured way of an architect and a rock climber, Jerald lines up a dozen craft beers on the granite countertop.

We take pictures before battle. We load Untappd on our phones. Then we drink.

In an old warehouse just north of downtown Houston, Saint Arnold Brewing Company looms large as the oldest and most established craft brewery in town.  Despite this reputation, St. Arnold’s still has the atmosphere of a startup and the attitude of an underdog.

St. Arnold’s CEO Brock Wagner met me at the door. We weaved through an open workspace of ping pong tables, dart boards, and a lot of dudes wassuping and high-fiving. But when we arrived at his office, it looked more fitting for a Fortune 500 technology CEO, with leather furniture, soaring windows, and loft-like environment. He seemed uncomfortable with the extravagance. [quote style=”boxed” float=”right”]”When we started out, there weren’t a ton of craft beer drinkers out there,” St. Arnold’s CEO Brock Wagner said.  “Around 2000, the average age of craft beer drinkers started to drop. Now people come celebrate at the brewery on their 21st birthday. This generation grew up with craft beer, and they expect lots of options.”[/quote]

“It’s funny,” he said. “When we bought this building, I got to create my own office. I wanted to do it right. But it looked a lot smaller on paper than it turned out to be,” he said as we sat down. “It’s still a little intimidating, and I work here every day.”

Born in 1994, St. Arnold’s has grown considerably over the last 18 years.  As the industry grew, St. Arnold’s grew, too.  Brock has decades of experience cultivating a rabid fanbase of beer fans from all walks of life. He is also deeply committed to the integrity of the craft beer community. As a result of his success and his generosity, the upstart breweries see him as a wise man, and they speak of him with reverence. 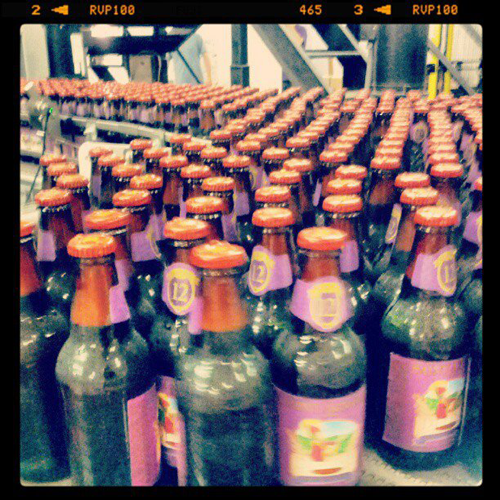 St. Arnold’s produced over 23,000 barrels from January to June of 2012, representing 37% growth over that same period in 2011.  In fact, “the first six months of 2012 exceeded the amount Saint Arnold produced in all of 2008.”  Compared to Buffalo Bayou Brewing Company, St. Arnold’s is a monster. But compared to the Golaiths of AB/Inbev or MillerCoors, even St. Arnold’s is a David. The craft breweries know their they need to work together to peel away business from big beer rather than compete with one another.

“As a craft brewery, it’s our job to connect with people and give them what they want,” Wagner said.  “Then they go ask for craft beer at the bar, and we all benefit.”

Big beer sees this trend, and they are trying to raise the stakes. Many craft breweries produce beer that is named after something local — a landmark, a historical figure, or even just an area code.  Last year, AB/Inbev quietly filed provisional trademarks for area codes, and this year they’re trying for airport codes, too.  Big beer companies have purchased successful breweries in big cities like Goose Island in Chicago, or set up craft beer divisions like MillerCoors did with Tenth and Blake Beer Co. These are industry consolidation moves disguised by marketing.

But that doesn’t deter craft brewers. There is still room to compete.

This explosive growth in craft beer is happening in spite of Texas state regulations. Open the Taps, a consumer advocacy group, works at a grassroots level to educate craft beer drinkers about the law, and to put pressure on legislators for change.

“There are two things that the Texas legislature can do to make the industry more entrepreneur friendly,” said Leslie Sprague, PR Director for Open the Taps. “First, they can allow breweries to sell their beer on site. Right now, you buy a ticket for a brewery tour, and you get to try the beer. But you can’t order an individual beer like you could at a bar, or buy a growler to take home. Those are high margin products. Much higher than a ticket for a tour.”

She paused to let that fact sink in.  “But it’s just the opposite for brewpubs. That’s the second thing. They can make it easier for brewpubs to distribute their beer, because right now, they can only sell on site. You can’t take home a six pack or a growler.  As consumers, we want more choice, and we get there by making it easier to get beer into the hands of a customer.”

In an election season that is about jobs, jobs, jobs, our politicians talk about small businesses and entrepreneurs as the gasoline powering our economic engine. Compared to technology or professional services, beer is a low margin business. It’s essential to find ways to increase the value of each customer. So craft breweries often look at their tours as an essential revenue stream. And yet, despite the well-reasoned logic laid out by Open the Taps, the law remains the same.

Every year around Labor Day, over 100 craft breweries converge in Galveston for the Brewmaster’s Festival. I drove down with a couple of friends, and we burst into the exhibition hall like 10 year olds at a baseball card show. Each brewery had a kiosk, and they poured their flagships, their seasonals, and their one-offs for us. The place was crowded, but there very few lines. Walk right up, get a taste, wander around, and socialize.

Except for Buffalo Bayou Brewing Company. Now approaching their one-year anniversary (with an impressive rookie season), Rassul and his crew set up shop towards the back of the hall, where they needed a little extra space to accomodate a constant line of 20+ people. It was, by far, the longest line in the room. We thought it was very unusual. Why would these people stand in line when they could walk up to another kiosk and drink excellent craft beer?

So I asked them.

I spent about 20 minutes asking two basic questions: Had they ever tried this beer before? Had they ever heard of the company before today?

“I got in line because there’s a long line,” one woman said. “But I don’t really care who they are.  As long as it’s good, I’ll be happy.”