Learn About the Houston Economy Through Spending Data

What does the Houston economy look like through the eyes of our credit and debit cards? A new study from the JP Morgan Chase Institute analyzed debit and credit card spending patterns in 15 US cities. There’s a lot that it can show us about how spending patterns differ with age, income bracket, and location throughout the metro area.

This report looks at the stuff you’d put on a credit or debit card: groceries, gasoline, clothing, bar tabs. It doest look at the stuff that you’d pay by check or bank draft, like auto, mortgage, or tuition payments.

Overall, things are slowing down. Rapid growth from 2013-2014 led to a slowdown this year that was magnified by dropping gas prices. If gas prices drop and consumption remains the same, people spend less. All of the 15 metro areas studied had weaker 2015 numbers than the previous year.

But Houston represented one of the steepest declines in spending, with a -1.5% YOY growth rate in 2015 (down from 7.2% in 2014). It shouldn’t be surprising: Houston is suffering through the days of cheap oil. And this data stops at July 2015, when oil was $65 a barrel. It will be interesting to see the spending shift as oil prices remain low and the local economy weakens.

For “local consumer commerce,” Houston ranks in the middle of the pack.  This metric looks at transactions that occur in the same neighborhood or metro area. Even though Houston is experiencing a slowdown, local spending with small businesses is a consistent growth area.

The growth reversal began in January 2015, and much of the cutbacks have been on fuel. This makes sense: Houston is a vehicle-dependent city, and lower gas prices means less fuel spending. 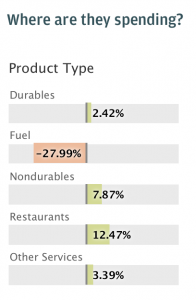 Around that same time, there was a slowdown in spending with large businesses. This could be tied to lower gas prices as well, since most gas stations qualify as large companies. Update: no they don’t. But for 6 out of 7 months in 2015 (that’s all the study contained), spending with small and medium businesses is growing.

A couple of things jumped out at me after looking through the data about people in Houston spending money on credit and debit cards:

Does all of this sound like gibberish? It’s tough to talk about numbers or write about maps. Click on the image below to check out an awesome interactive visualization of spending data and the Houston economy: