Last year, the City of Houston passed an ordinance that regulated certain types of housing for people on parole. This ordinance includes regulations to promote safety, but it also includes a distance requirement that effectively prohibits new housing. Houston already lacks enough housing for people on parole, and this distance requirement only compounds the problem.

Before a person can be released from prison on parole, they must arrange housing. They can live with family, at a state funded transitional facility, or a parole division approved “alternate housing” facility.

There is a housing shortage for people on parole

“There are about 2,000 beds in state funded transitional facilities,” notes Doug Smith of the Texas Criminal Justice Coalition. “Some of the folks being transferred to these facilities are coming from in-prison therapeutic communities, and the transitional placement is considered to be aftercare. Others are sent there because there is nowhere else the person can go and they have no means of paying for a bed in an alternative housing provider.” 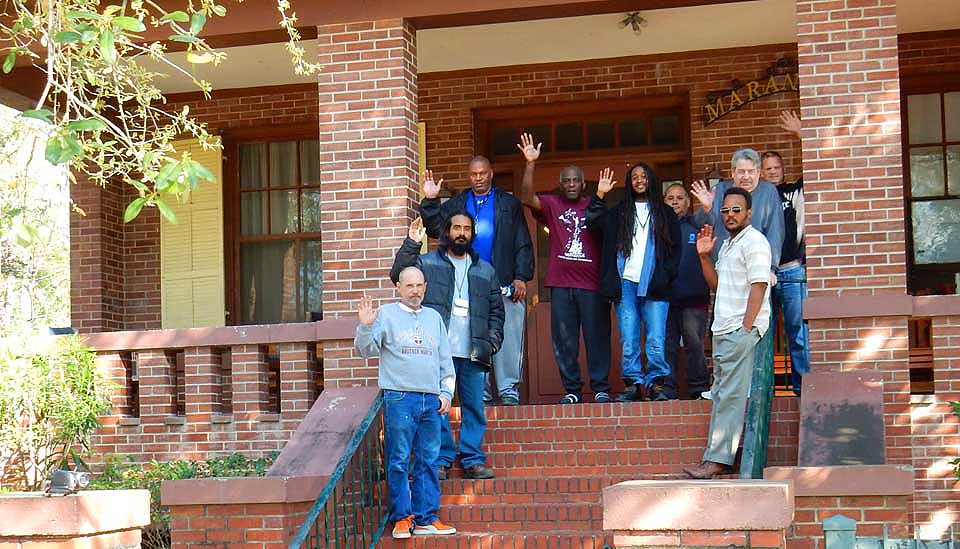 At their best, Alternate Housing Facilities (AHFs) provide necessary support and re-entry services. This is one of sixteen Magnificat House locations in the Houston area.

“A very small proportion [of parolees] have the means of paying an alternative housing provider, and none of the for-profit providers will lease a room to someone who can’t pay,” Smith continued. “This means that the demand for the state funded beds increases substantially, making people remain in prison while they wait for a bed. As more cities/counties pass tighter restrictions on alternative housing providers, the longer that people have to wait in prison to find a bed.”

For those that can pay for it, getting housing in an AHF already requires some bureaucratic jiu-jitsu and a little bit of luck. The process starts with an incarcerated person applying for a bed in an AHF prior to their release from prison.

This involves downloading a form from the Texas Department of Criminal Justice (TDCJ) website, submitting it to a regional director who may circulate it to staff for review and approval. If they approve, the application gets sent to Huntsville Placement and Review Processing Unit (HPRU), who are responsible for monitoring the occupancy of AHFs across the State of Texas.

We don’t even know the total capacity of housing

TDCJ does not have control over the capacity of AHFs across the state. In fact, they don’t even monitor the total capacity. Instead, AHFs operate as private sector partners, subject to modest oversight. As a result, the quality of AHFs vary.

Yet the overall capacity of AHFs is very important. HPRU staff schedule a person’s release on parole based on the availability of housing. If there aren’t enough beds, people wait in prison until they become available.

“Some are organized programs that help with the transition back to the community and may even give the person help on the first few months of rent while they find a job,” Smith said. The best ones “have volunteers who can help people with the difficult adjustment. There are only a handful of these homes.”

However, not all AHFs are high quality. “They are mostly a for-profit enterprise,” Smith said. “People with a home or building they can use to rent beds to people getting out of prison.”

While it’s true that all alternative housing providers who lease rooms/beds must be approved by the Parole division, the basic requirements are minimal. This leads to high quality and low quality facilities getting lumped together.

AHF regulation is important, but misapplied in Houston

Houston has a lot more AHFs than anywhere else in Texas. Still, we don’t have anywhere near the capacity we need to house the number of people coming home on parole. The Texas Department of Criminal Justice estimates that 13,000 – 15,000 people are released to Houston each year.

Based on the available data, we estimate Houston’s AHF capacity to be about 1,100 beds. There is clearly a mismatch between the demand for housing and the number of beds available.

Some people don’t care. They don’t want an AHF in their neighborhood, and it’s easy to understand why. Until last year, AHFs were unregulated, sometimes hazardous, and definitely seen as unsafe.

Then the City of Houston set up local regulations to improve the safety of AHFs. They established a permitting procedure that requires annual safety inspections and a certificate of occupancy. They also set up distance requirements for new AHFs.

During public comment in March 2018, several criminal justice advocates presented evidence that the 1,000 foot distance requirements were so strict, it would prohibit new facilities within the city limits.

The people who are affected — the people on parole — can’t even vote for the people making the laws about where they can live. Houston has over 30,000 people who are disenfranchised because they are still incarcerated, on probation, or on parole.

One of the provisions of the ordinance was to revisit the outcomes in one year. At the time of this writing, it has been 16 months, but we haven’t revisited it yet. In the absence of that discussion, I thought it would be helpful to look at the data.

The ordinance passed by City Council has a two key points worth noting here:

It’s critical that the City permit, inspect, and collect additional information about these AHFs.

But the 1,000 foot distance requirement essentially prohibits any new AHFs within the City limits, despite what the City claims.

This map shows parks, schools, daycare facilities, and AHFs in red with a buffer of 1,000 feet (current City ordinance), 300 feet, and the state minimum requirement of 1,000 feet between AHFs only.

In the ordinance, the City of Houston justified their expansive 1,000 foot distance requirement with three dubious statements:

This note in the ordinance tries to make the case that there is plenty of room for new AHFs. But this is a poor way to measure land availability, because it does not take into account:

The City could address these issues by providing greater detail and aggregate statistics about the parcels where a new AHF could appear. What percentage are in a floodplain? What percentage contain an HCAD residential building code? What is the average tax assessed value?

In order to understand the increased risk of crime related to the presence of an AHF, the City has to establish a causal relationship. In other words, they have to prove that AHFs increase crime. With the current numbers, they do not make this case.

Instead, the City simply uses the hazy term “on average.” There are several problems with this approach:

While there aren’t comprehensive statistics about recidivism rates of AHF residents, at least one provider noted that 95% of their tenants never return to prison.

Dubious statement #3: “50% of people living in AHFs were convicted of a crime sexual in nature.”

The City provides no evidence to support this claim, so I looked at aggregate numbers in court disposition data to see if the numbers look similar. They do not.

I looked at 1,708,779 case records from Harris County criminal courts. Since “sexual in nature” is not a technical term, I used pretty broad criteria to find those cases, and I included cases that have been dismissed, cases where there was no assault involved, and harassment/stalking cases. Still, only 2.65% of the case records were “sexual in nature.”

But drug cases? That’s a different story. I found that 22.7% of the case records were drug related, making a drug case ten times more likely than a sex case in the data.

Additionally, there are already distance requirements imposed on people convicted of a sex crime. Texas law requires these people to stay over 500 feet from a child safety zone, including schools, parks, and day care facilities. This naturally reduces the number of AHFs available for sex offenders.

What impact does this ordinance have on housing for people on parole?

This ordinance put structure around the inspection and certification of AHFs in Houston, which is valuable and sorely needed. However, it has also constrained the development of new AHFs, which may have been the point.

In March 2018, Houston had 88 unique AHF facilities (97 total). In this analysis, a facility is not considered unique if it occupies an adjacent parcel or consecutive address number. 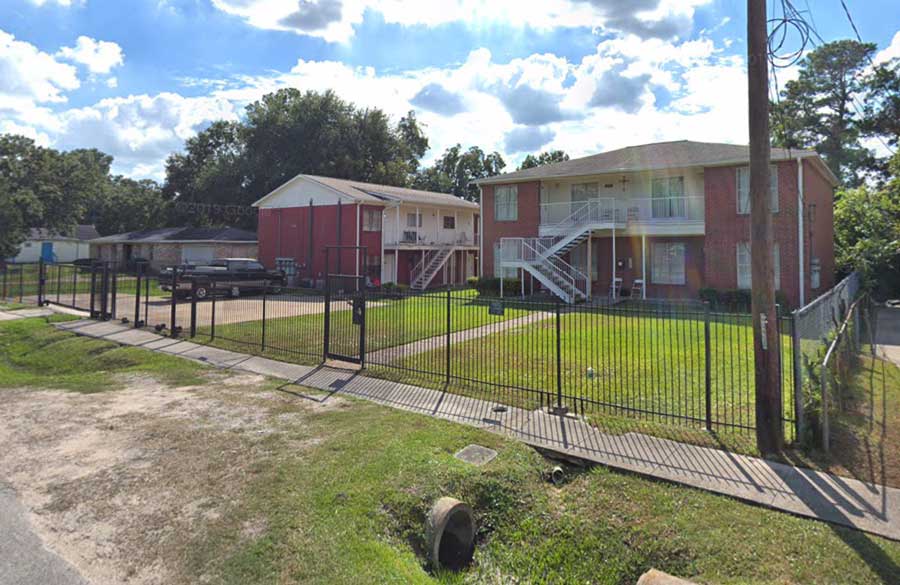 These two buildings have the same facility name, the same operator, and sit on adjacent parcels. They share a driveway and a common fence. Yet, they are listed as separate alternate housing facilities by TDCJ. Under the current city ordinance, these buildings are treated as individual facilities. New multi-building developments like this are prohibited due to the 1,000 foot distance requirement. For the purposes of this analysis, we treat cases like this as a single facility in the “unique” count. Source: Google Street View.

What can City Council do to fix this ordinance?

It’s clear that AHFs need regulations to ensure the safety and quality of living facilities for people on parole. But this ordinance goes too far. Here’s what City Council can do to fix it:

To be clear, there are many benefits to permitting AHFs: increased safety and control over hazardous housing for parolees, and a better understanding of capacity now that the City is tracking the size of the AHF.

But the distance requirement effectively prohibits the growth of AHFs within the city. This places severe limitations on where parolees can live and work, pushing their housing options far outside of Houston’s centers of employment, increasing commutes, and making it more difficult to comply with the rules of parole.