The City of Houston Open Challenge closed on December 1. It was a lightning-fast, 30 day challenge around three areas identified as “priorities” by Mayor Parker and Mayor Pro Tem Gonzalez. This is part one of a three part series profiling each of the three open challenges. (part two) (part three coming soon)

Up first is Patrick Eleden. He wrote congre.us, which is a shared calendar system for public events and the winner of our Public Meeting Notifications challenge. He lives in Clear Lake, he’s a Senior in high school, and he built the app over his Thanksgiving break. Basically, he’s awesome.

Congre.us is the winner of the Public Meeting Notifications challenge.

Jeff: Can you tell me more about your background and what got you involved here?

Patrick: Well, I’m a high school student and I’ve always been interested in computers and tech stuff. Over the summer, I worked for my aunt for computer programming and website development stuff, and then I also worked for a local guy here to do their websites, so I’ve had a little bit of experience in programming. But I’m always here to learn. And I participated in the Houston Hackathon with some guys from my high school last year.

Jeff: Yeah, I remember. You guys were awesome.

Patrick: Oh, thanks. Yeah, we had fun with that.

Jeff: So how did you hear about the open challenge?

Patrick: I heard about it through the meetup. I got the email like a couple of weeks before it was due, and then I had Thanksgiving off, so I figured I’d work on this.

Jeff: You just built it over Thanksgiving?

Jeff: That’s awesome. I saw that you wrote the app in Node. Why did you choose Node? What other tools did you use?

Patrick: I chose Node because I hadn’t really messed with it much in the past, so this was a good opportunity to dive in and learn more about it. I also used Express and Passport for the templating and for user authentication.

Patrick: Okay, well in my sign up in here, I have the choice of a preset number, but as the app was just in testing, I didn’t really use it to narrow down users displays of the town hall listings, so I would definitely add some filtering options for that. I’d love to improve the layout a little bit. It’s a little bit bland. I just tried to make the backend work and then I just put the frontend together with Bootstrap. So I would improve on that. I’d get some cool pictures. But as far as the functionality, it’s pretty close to where I’d want it to be.

Jeff: So I just have one more question for you. What are your plans after graduation? You said you were a senior in high school?

Patrick: Yeah, I’m a senior in high school. I’ve been accepted to A&M. I’m waiting for UT and a couple of other schools. I’d like to go to UT to pursue computer science. 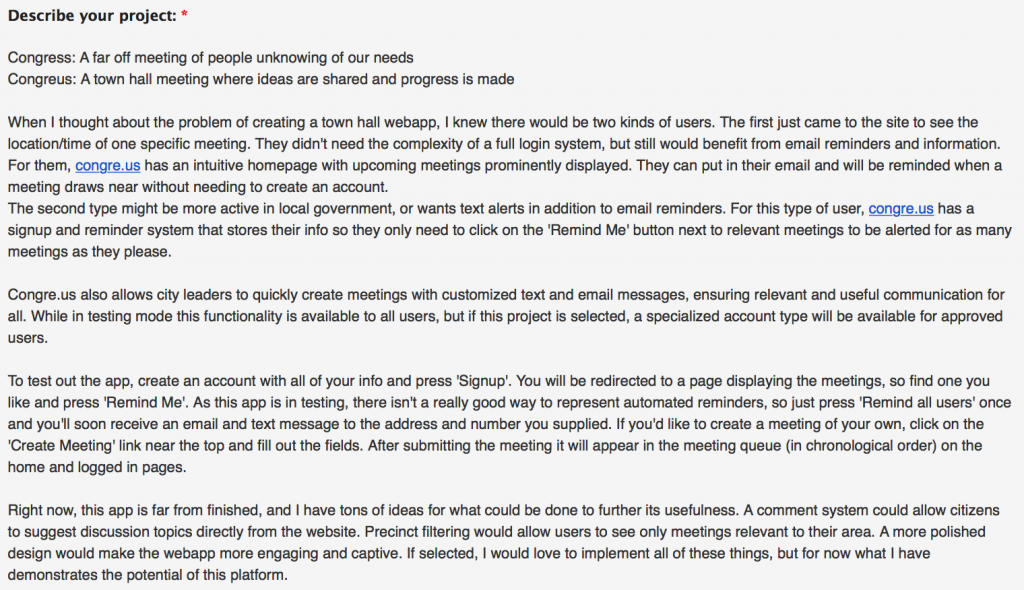 Patrick’s original submission to the City of Houston Open Challenge.