Houston Mini Murals – From Idea to Execution in Five Months

The Houston mural arts program is a work in progress. This is the story about how it got off the ground. Even though Elia and Noah are at the very beginning of their journey, I hope this blog is helpful to people in other cities who want to do the same thing.

I first met Noah and Elia Quiles of UP Art Studio at a civic hack night where I had posted a sample project for attendees (“create a mural arts program”). I liked them immediately. Noah is gregarious, with an intense energy and a strong work ethic. Elia is pragmatic, with a keen business sense and a clear vision for the future. They make an excellent team. Fresh off their Biggest Mural in Houston project, Noah and Elia were searching for an even bigger canvas.

The Philadelphia mutual arts program is the largest collection of outdoor art in the world. Growing up, I spent a lot of time looking at the murals depicting hometown heroes, political figures, and aspirational tableaus. Today, these murals have evolved into optical illusions, acts of placemaking, and messages of love and hope.  I thought these murals existed in every city, and that public art was always a part of public life.

A Love Letter For You – Philadelphia Mural Arts Program

That’s not the case.  When I moved to Houston, the lawless land free from zoning, the subversive street art captivated me. I poured over the work of Coolidge, GONZO247, Wiley, ACK!, and many others. I watched Stick ’em Up! and I started to get a sense of Houston’s street aesthetic. We have the talent. We have the streetscape. But there was no coordinated effort to cover the city with beautiful art. We can do a lot more.

So when Noah and Elia showed up to that hack night, I knew they meant business. We got to know one another over several dinners. We studied mural art programs all over the world, borrowing ideas and trying to figure out what we can adapt for Houston. It was clear from their past success that they were prepared to do something bigger and more sustainable.

Still, walls are hard to come by. Curating murals is a two-sided market. The curator has to find suitable wall locations from property owners. They also have to find artists who are capable of executing a large-scale installation. Even after pulling together a top-notch advisory board for this project, we didn’t get very far.

Then Elia had a breakthrough. During the course of her research, she came across an amazing program in Emeryville, California where they painted traffic signal utility boxes. Inspired by the small scale and wide distribution, she put together the business case. The numbers looked good, and everyone started getting excited.

That’s when things took off.

Late last year, they met with Jeff Weatherford of City of Houston Public Works. As the Deputy Director of Traffic Operations, Jeff’s responsibilities include maintaining all of the traffic signals across the city. To our surprise and delight, he was not only familiar with utility box art programs, he was extremely encouraging. As long as the box was new and didn’t need repairs, we could pick and choose at will.

Then in January, we met with Sara Kellner, the new Director of Civic Art at the Houston Arts Alliance. We talked about a pilot program that engaged local artists. With UP Art Studio’s prior experience and the City’s blessing, Elia and Noah made a strong case to HAA. Right away, Sarah’s eyes lit up. She had worked on a similar program for METRO, and UP Art Studio’s due diligence inspired confidence. She agreed to make this program part of HAA’s civic art portfolio on the spot.

Minnette Boesel of the Mayor’s Office of Cultural Affairs was also at that meeting. They are working on an Arts and Culture plan for the city, and this program fit nicely with their idea for community engagement and civic art.

After making sure the right people were aware of the project, UP Art Studio began the hard work of raising funds. This is when the advisory board kicked into high gear: Adam Brackman introduced them to property owners who sponsored utility boxes outside their buildings. I pointed out the pile of unused city council discretionary funds. In coordination with HAA, Jenni Rebecca Stephenson of Fresh Arts stepped up to be their fiscal sponsor for the project. So many other people contributed in ways large and small, including Karine Parker, Brittany Bly, Aimee Woodall, Monica Danna, and James Phelan.

Elia and Noah pounded the pavement and shopped the idea around to every council district, every management district, and all sorts of community stakeholders. They did the hard work of convincing people to care. And they were successful.

In only five months, we went from concept to implementation. On Saturday, April 18, Gonzo painted a utility box and gave us a preview of what’s coming: 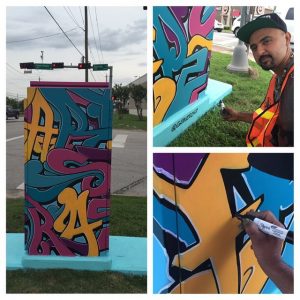 Throughout the summer, UP Art Studio will be producing mini murals throughout District K. But this is just the beginning. They’re not going to stop until the city is covered in color.

Check out the results from UP Art Studio’s pilot program in District K:

Jeff is passionate about data. He founded January Advisors and Sketch City, and serves on the board of the League of Women Voters of Houston. Read his full bio on LinkedIn.

The Story of Kuukibot and Air Quality in Houston