On May 31, over 150 people converged at the Houston Technology Center for the second annual City of Houston Open Innovation Hackathon. Over the course of 24 hours, they formed teams, worked all night, and presented 18 different projects to Mayor Parker and her senior staff. You can check out all 18 projects here. Once again, we were honored to have the support of Mayor Parker and Council Member Ed Gonzalez.

The hackathon was sponsored by the Boniuk Foundation, a homegrown organization that promotes religious and cultural tolerance. It was also part of National Day of Civic Hacking, a global movement to raise awareness of civic innovation.

Taking home the Boniuk Foundation grand prize was CultureHunt, an app that helps citizens navigate the various cultural and religious treasures in the City of Houston. In case you didn’t know, Houston is the most diverse city in the United States. There are many cultural treasures to find! The Boniuk Foundation is committed to future development of this app, so we’ll post more about it as they hit various milestones. 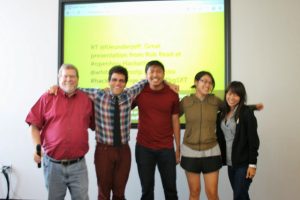 Mayor Annise Parker and members of her staff were also on hand to judge the event. They selected three projects for further exploration, including:

Also in the winner’s circle was Houston Comprehensive Plan, who won the Rice Center for Civic Leadership award, as well as Houston’s Unheard, State Signal, HPD Reports, and Make Houston a Better Place. For a full list of all the teams, please check out Open Houston’s recap.

But simply looking at the projects doesn’t tell the whole story. My favorite interactive exhibition was @iwishthiswashou. They set up a bulletin board with a picture of an abandoned property, and invited people to offer up what they would do with the space. The results were inspiring.

Then there was the team of sixth graders who built three different sites reflecting their civic interests. My favorite? When they demanded fresh milk in their school lunch. 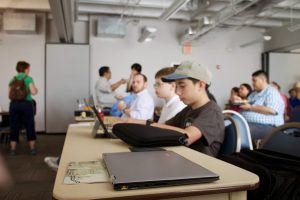 A team of sixth graders built three apps for the Houston Hackathon. Photo by Niki Virani.

We also had former Presidential Innovation Fellow Dr. Robert Read who worked on features for a price transparency application. His team included previous Houston Hackathon winner David Young, who produced a nifty tool that arranges data in a CSV file for easy import into other applications.

There were so many great stories that came out of the Houston Hackathon that it’s difficult to summarize in one spot. There were children and adults, software and hardware, tech nerds and policy wonks all rolled together into one, 24 hour event. It’s a circus of civic engagement and feel-goodery that, for at least one day, will make you feel like your skills can make a difference.