For the past two years, the city of Galveston, Texas has been my home. Located about an hour southeast of Houston, Galveston is an island community that has the perfect blend of beachtown kitsch and rich historical character. It’s also been a great place to ride out the pandemic – I even took up surfing!

When I arrived in 2019, I was eager to get involved in the community. I was put in touch with a community-building nonprofit organization called Vision Galveston. For several years now, they have been working to empower the community to address challenges related to housing, green space, civic engagement, and economic development.

Like many community organizations, Vision Galveston needed data to help them quantify problems and come up with solutions. January Advisors has been fortunate enough to work with Vision Galveston on several data projects related to housing and its impact on community life here on the island.

In this post, I’m going to share some key insights from our work with Vision Galveston. I think there are some important lessons here, not just for other tourist-driven communities, but for cities across the country.

Housing prices have been skyrocketing

When we moved to Galveston, my wife and I were lucky enough to rent from a family friend who has been living here since the 1990s. Back then, our landlord bought her house for next to nothing, and has since transformed it into a beautiful, Victorian-era home (or “pre-1900 storm,” as we say on the island).

As you can imagine, our landlord has seen a lot of changes over the years. One of the biggest changes she talks about is housing costs: it’s now much more expensive to rent or buy a home. Insurance premiums and property taxes are rising fast. Families are getting priced out.

Vision Galveston heard the same thing from residents all over the island. When we started working with Vision Galveston two years ago, they had just completed a series of community engagement events to find out which issues were most pressing to current and former Galvestonians. Affordable housing was near the top of the list.

The data back up these concerns. Over the past ten years, home values and rents in Galveston have increased at a faster pace than people’s wages.

In some ways, what is happening in Galveston aligns with national trends. Prices for building materials have gone up, and demand for housing is high. Especially since the start of the pandemic, people have been coming to Galveston to escape crowded cities like Houston.

But the housing market in Galveston also appears to be more extreme, and it may be a sign of things to come for other communities. As we explored in this blog post for Vision Galveston, home values are rising faster in Galveston than in most neighboring cities on the mainland.

Another factor behind rising home prices in Galveston is the influx of new short-term vacation rentals. While vacation rentals have always been an important part of the Galveston economy, the past two years have seen a dramatic increase in the number of short-term rentals posted on sites like Airbnb and VRBO.

Moreover, these short-term rentals don’t fit the stereotypical image of an Airbnb owner renting out a spare room or garage apartment. The vast majority of short-term rental owners don’t live on the property (93%) and most are from out of town (70%).

The loss of housing that would typically go to homeowners or long-term renters to short-term rentals is partly to blame for rising home values and rents for island residents. But it is also leading to a loss of community in some of Galveston’s oldest neighborhoods. As Texas Monthly points out, when most homes on the block are short-term rentals, long-term residents have no neighbors to turn to when the next hurricane or flood strikes.

Galveston County has one of the highest eviction rates in Texas

Long-term renters are also having a hard time in Galveston. As part of our work with the Eviction Lab, we started collecting data on eviction case filings in Galveston County at the start of the pandemic.

One surprising detail we uncovered was that Galveston County has had one of the highest eviction rates in Texas during the pandemic. Not only is the number of evictions per 1,000 renter household higher in Galveston than Harris and Fort Bend Counties, but it is also higher than in Fort Worth, Dallas, Austin, and El Paso.

As we explored in a blog post for Understanding Houston, higher eviction rates in Galveston reflect, in part, differences in housing patterns and costs. Galveston County is less urbanized than the rest of Houston and has a smaller share of renters. Residents who do rent in Galveston are more economically vulnerable and pay more of their incomes on rent. In 2008, for example, Hurricane Ike wiped out more than 500 units of affordable housing on Galveston Island which have yet to be fully replaced.

We wanted to help Vision Galveston bring evictions and the concerns of renters to the attention of Galveston City Council, so we created custom housing reports for each city council district. 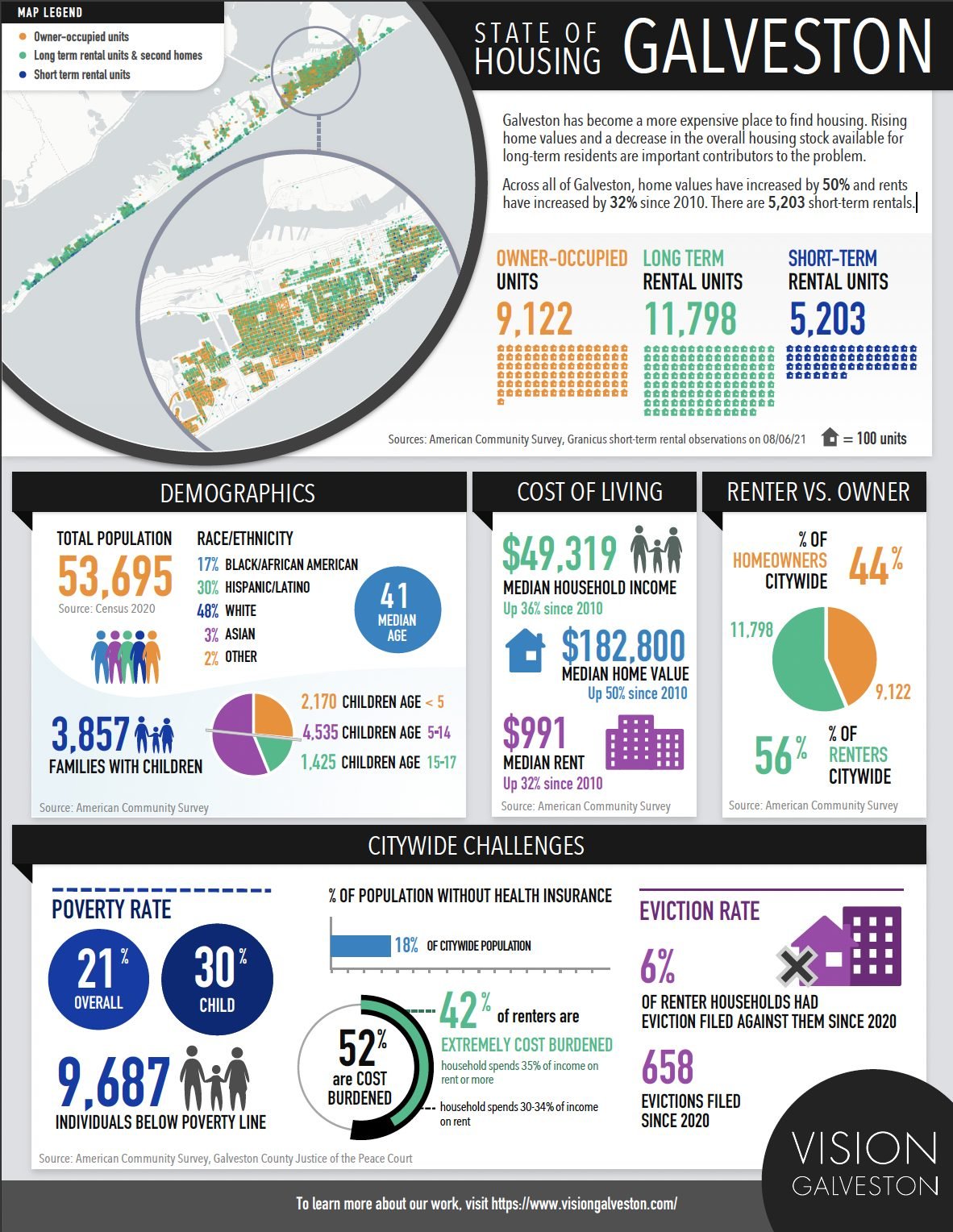 January Advisors made custom data one-pagers on the state of Housing in Galveston for Vision Galveston.

Overall, the housing crisis has made Galveston less affordable for families and essential workers. As we detailed in our analysis for Vision Galveston, there are nearly 800 fewer families with children living on the island today than there were ten years ago. This is despite the fact Galveston’s overall population has been increasing during this period.

There is also an equity component to this loss: the majority of the children who have left the island are Black or Latino.

To be fair, hurricanes and flooding have made island living less appealing for some families. But others who left Galveston continue to work on the island. For instance, the share of University of Texas Medical Branch (UTMB) employees who commute to the island has increased over the past ten years from 64% in 2010 to 70% in 2020. As we uncovered, this shift was driven by residential employees moving off the island, not new employees starting their employment off-island.

In other words, the people who serve this community don’t live on the island, and in many cases, they can’t afford to live on the island. Left unaddressed, these trends will have consequences for the community character of Galveston, and could have serious economic repercussions related to talent retention and hiring for employers.

Vision Galveston is making the case for taking these trends seriously, and has been mobilizing the community to engage with local officials to take action. Data helps create awareness about the size and scope of the problems Galveston faces related to housing, and a sense of urgency of the need to solve them.

Despite these troubling trends, it hasn’t all been doom and gloom during my time in Galveston. I also took up surfing during the pandemic, and like a true data nerd, I’ve been tracking the frequency, locations, and conditions of my surf sessions.

It’s well known that winter is the best time to go surfing in Galveston, and my data back this up: I surfed 2-3 times a week in late February and early March. By contrast, I didn’t surf at all in July and August.

So if you’re wanting to get into surfing this winter, grab a wetsuit and head to 43rd and Seawall. There’s plenty of short-term rentals for you to choose from. Try to pick one that supports an island resident.

Chasing kudos on Strava at the Chevron Marathon