The “blue wave” of the 2018 midterm elections crashed into Harris County last Tuesday with unprecedented voter turnout for a non-presidential election year. Countywide, voter turnout was up from 34% in 2014 to 52%, according to unofficial counts. That’s more than 520,000 additional ballots than in 2014.

Yet, despite high turnout, nine polling locations failed to open on time and experienced additional delays due to equipment issues, forcing many early-morning voters to leave in hopes of returning later in the day. Fortunately, a state district judge ordered those nine polling locations to remain open an extra hour. But the question remains: Did the delayed openings depress voter turnout in those precincts?

The short answer is, “No!” – but I’ll show you how I got there. For this analysis, I used voting precinct data for Harris County to explore the following questions:

(If you’re here for a map of voter turnout: scroll down to the bottom.)

Who was impacted by the delayed openings?

Minority voters, especially Black voters, were disproportionately affected by the delayed openings. With one exception (Precinct #0055 – Hampton Inn Katy Fwy), polling locations with delayed openings serve voting precincts with large Black and Latino populations (based on estimates from the American Community Survey). In 7 out of 10 precincts, African-Americans make up the largest race-ethnic group and are over-represented compared with all of Harris County. 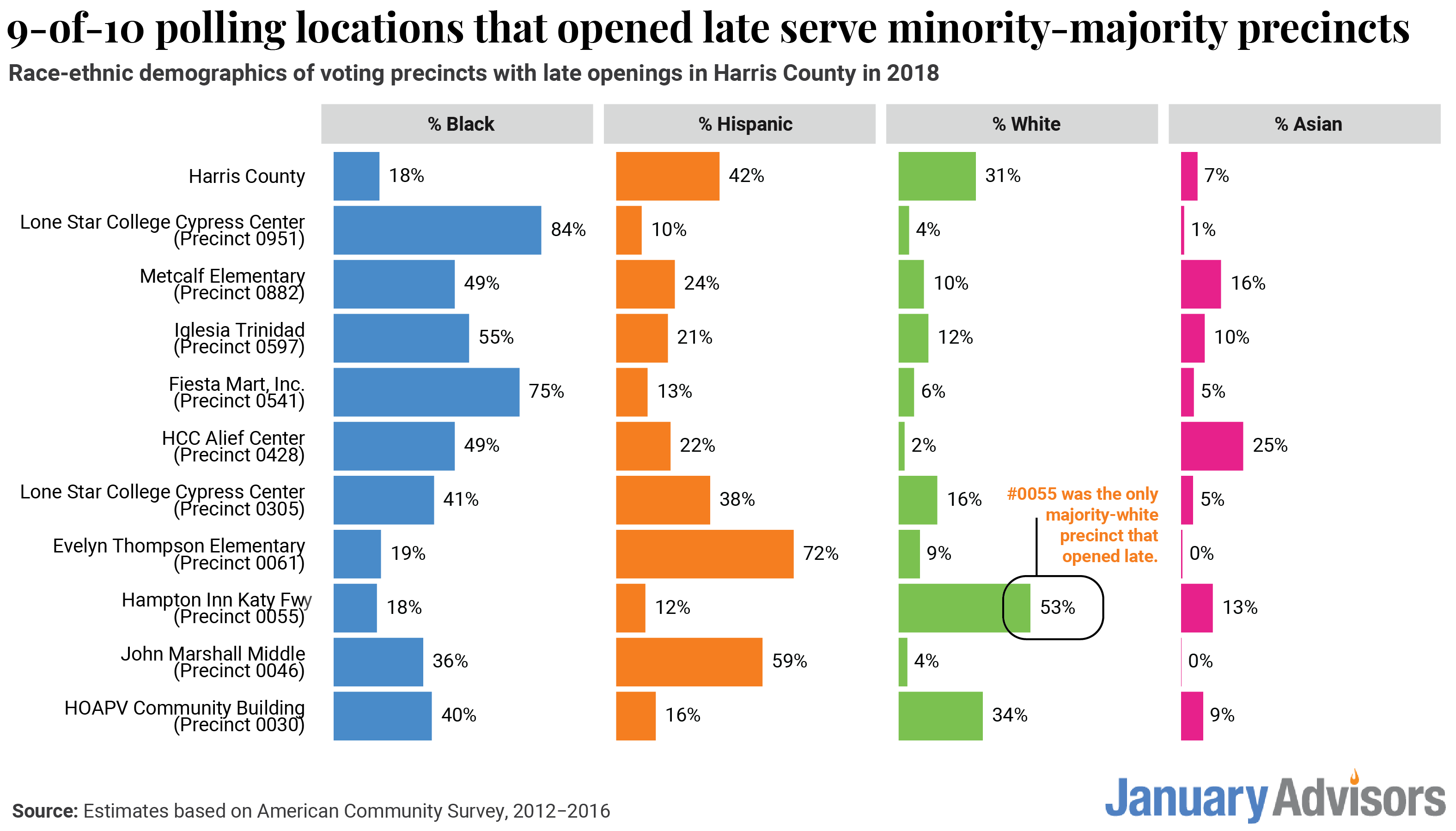 Was turnout affected by the delayed openings?

To gauge the impact of the delayed openings on voter turnout, I employed a difference-in-difference approach, comparing precincts that opened late and those that opened on time based on the change in turnout between 2014 and 2018. This helps account for the fact that turnout was up everywhere across Harris County in 2018, as well as any other differences across precincts that might affect overall levels of turnout.

That’s not what I found. It’s true that overall levels of voter turnout were lower in many of these precincts compared with Harris County overall. In Precinct #0061 (Evelyn Thompson Elementary), only 39% of registered voters cast ballots compared with 52% countywide. 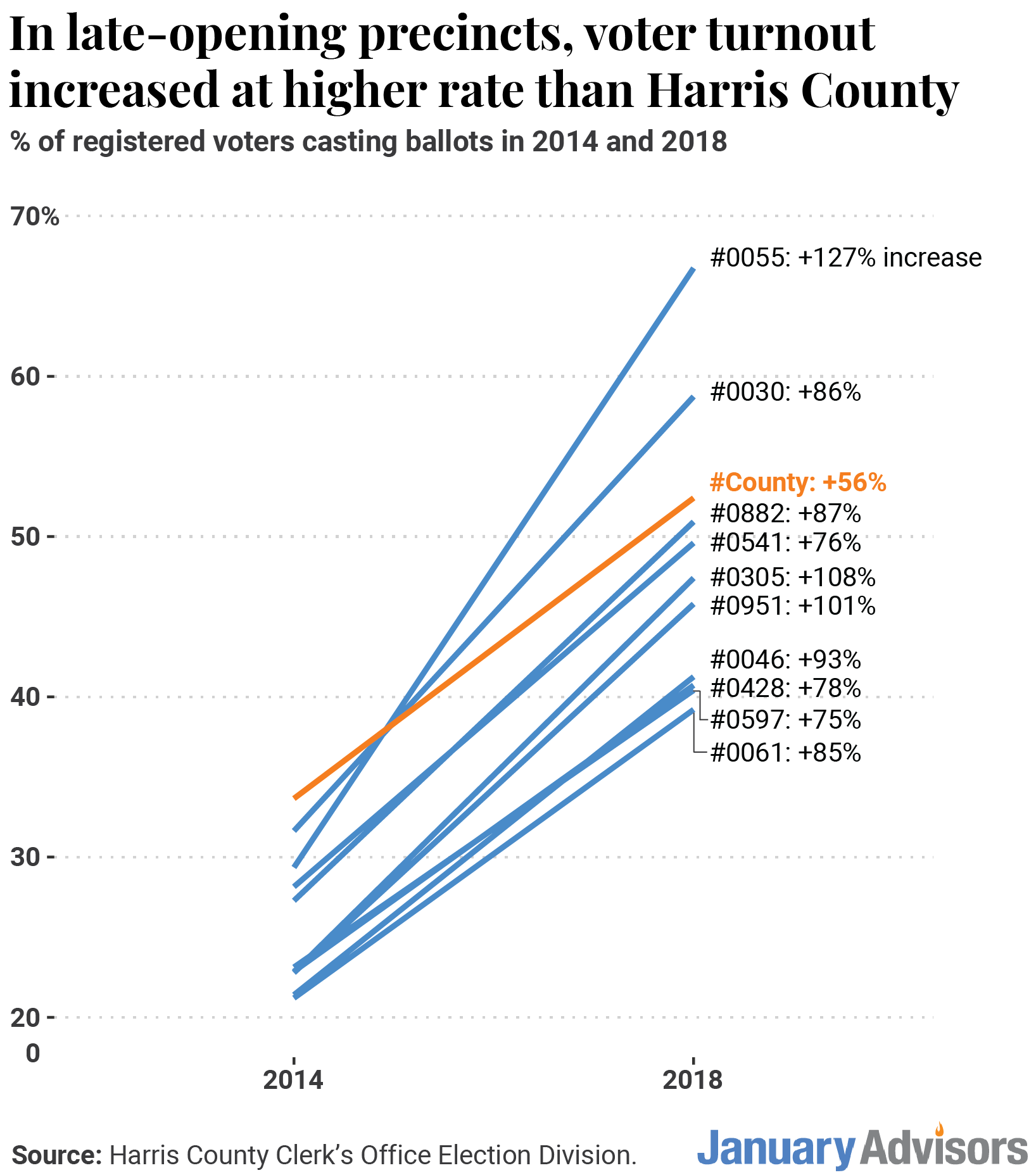 Could turnout have been even higher in these precincts if the polls had opened on time? It’s possible. But there does not seem to be evidence suggesting turnout was significantly depressed. One important factor could be early voting: countywide, over 60% of votes cast were done before election day. If early voting was a lot more common in the precincts that opened late, fewer voters may have been affected by the delays on election day. Check back here for that analysis when the data becomes available! 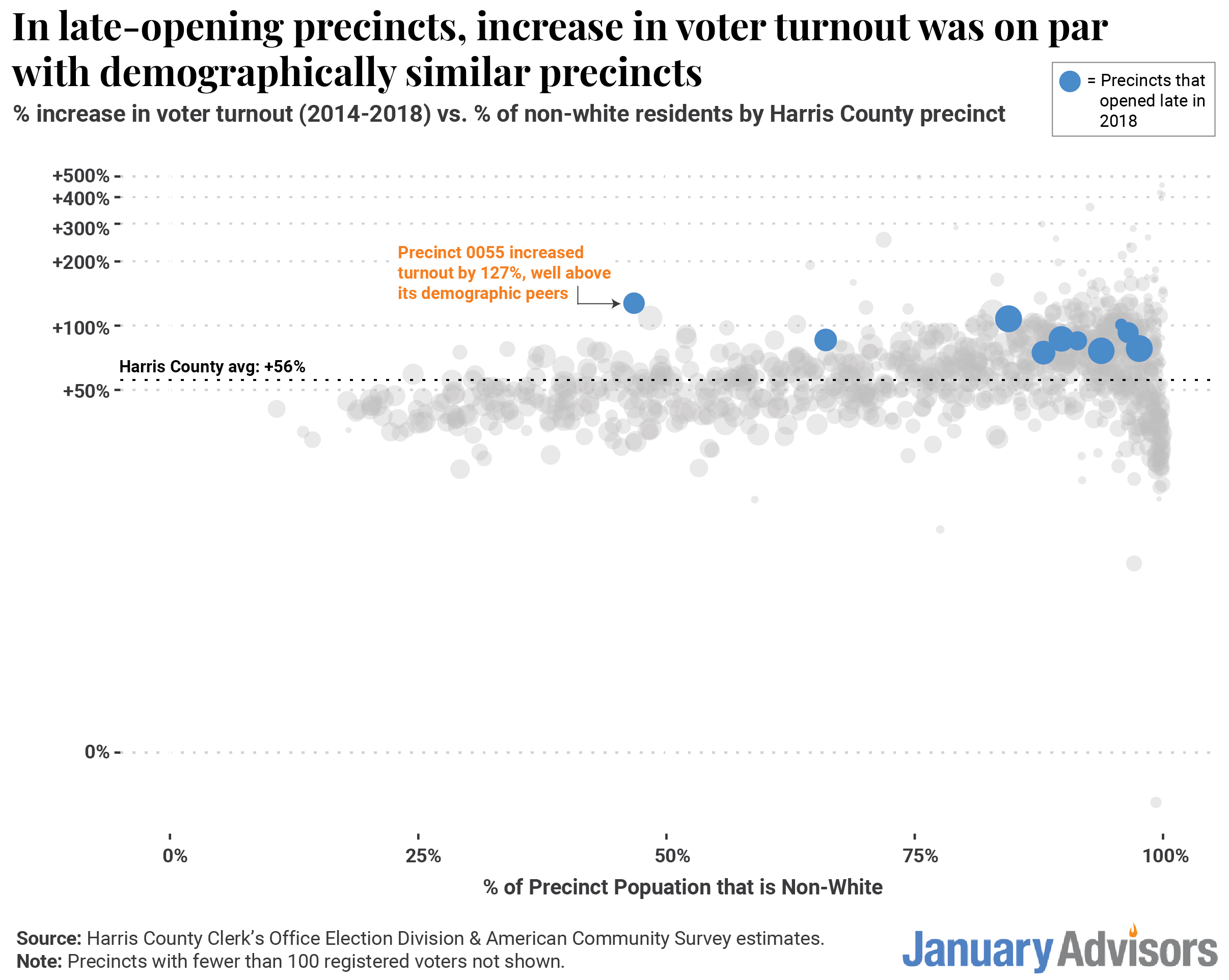 Finally, you can explore the change voter turnout from 2014 to 2018 midterms in Harris County with the map below. The bluer the precinct, the greater the increase in voter turnout in 2018 compared with 2014. Only a handful of districts saw declines in voter turnout.