MobilityHouston is a website that crowdsources transportation policy ideas from Houstonians. The goal is to help lawmakers create smarter, more comprehensive transportation policies. They do it with a specific focus on mobility and a broad community engagement strategy.

So Far, Policymaking is Offline

Houston’s lawmakers have to get smart on a range of issues before they write the laws. They do this by talking to constituents, attending superneighborhood meetings, and meeting with lobbyists.

As a citizen, you can offer your expertise too. You can write your councilmember or call their office. You can show up downtown on Wednesday morning for a City Council session. You can get up early on a Saturday morning for a community meeting.

But until now, there was no easy way to start a conversation online. This is a big missed opportunity.

In transportation, there are big challenges ahead that require a lot of tech savvy thinking. For example, driverless cars will be here within a few years, and they will have a big impact on infrastructure, design, and transit models.

It’s obvious that getting tech-minded people to participate in the discussion requires an online component. We’re long overdue for something like MobilityHouston.

For government-backed, community-facing projects, failure is not an option. But what if you could stack the deck? What if you could get the right people to pay attention? That’s the idea behind Glasshouse Policy, an Austin-based, non-profit policy crowdsourcing organization.

Glasshouse Policy has partnered with a variety of groups inside and outside of government. They’re able to reach a lot of people.  They’ve got academics, non-profits, and management districts on board. So the conversation is bound to be smart and guided by experts.

For six months, the Glasshouse Policy team visited Houston on the regular. They met with as many community partners as they could, and they designed a pilot program just for us.

The result of this effort is MobilityHouston, an online forum specifically for transportation policy, specifically for Houston. Over the next five months, Glasshouse will crowdsource ideas from people across the city.

The team enlisted excellent community partners, such as the Hobby Center for Public Policy, the League of Women Voters, and the Houston Chronicle (who established a chron blog for the project).

We even got into the act and helped with the MobilityHouston soft launch:

But that is just the beginning.  Over the next five months, I’m excited to see the ideas that will emerge from this discussion.

Why is this important?

MobilityHouston gives everyone in the city an equal opportunity to weigh in on transportation issues. All too often, it’s just experts and lobbyists.

Houston has an ordinance that requires the registration and disclosure of anyone who lobbies city government (Chapter 18, Article V, Sec. 18-72).  So, theoretically, this list of lobbyists is your guide to many of the voices in the conversation.

But the rules are just for show. Over the summer, the Houston Chronicle points out that these numbers simply aren’t accurate because of evidence that when lobbyist registrations lapse, work continues, and the rules are never enforced.

Crowdsourcing adds more voices to the policymaking process. It’s highly transparent, in contrast to lobbying. It reaches a demographic that might not otherwise attend a community meeting. And it provides a treasure trove of data.

The MobilityHouston platform is pretty straightforward. You can browse conversations without a login. Registration is simple, and can piggyback off any one of four social networks.

A few weeks after the soft launch, nearly 50 ideas have been submitted related to communing, public transit, and urban growth. 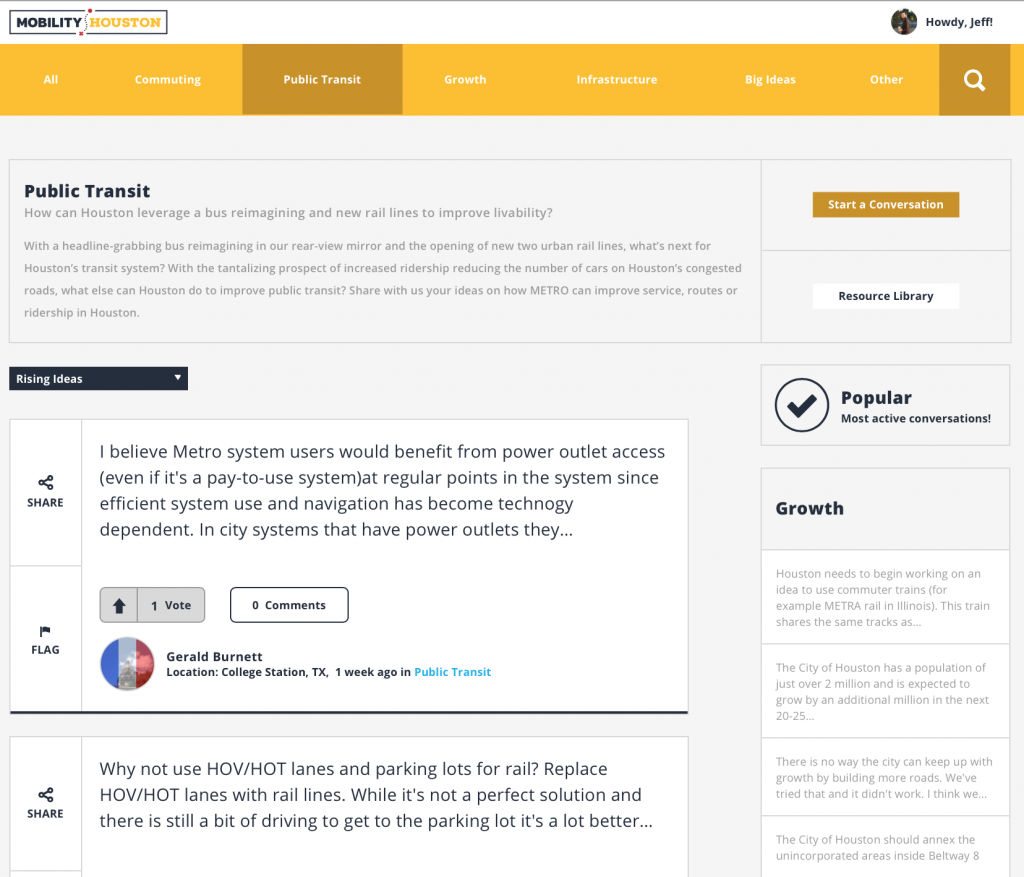 3 Things MobilityHouston Did Right So Far

For such a radical concept from a bunch of out-of-towners, there are a lot of things that Glasshouse Policy did right when bringing the MobilityHouston concept to town:

The pilot program is scheduled to run through mid-2016, and I’m excited to see how it performs. If you’re interested in learning more about this project, be sure to reach out to Glasshouse Policy.