Chasing kudos on Strava at the Chevron Marathon

The Chevron Marathon is this weekend, bringing 27,000 runners from around the world to Houston. Each runner carries with them unique reasons that keep them moving through busy weeks and bad weather. Some common motivators are improving cardiovascular health, getting to know your city, socializing with a running community, and the satisfaction of setting and accomplishing goals.

But my favorite has to be the kudos on Strava.

The so-called “runner’s high” usually eludes me, but there is a major burst of dopamine for each kudo I receive after a run. 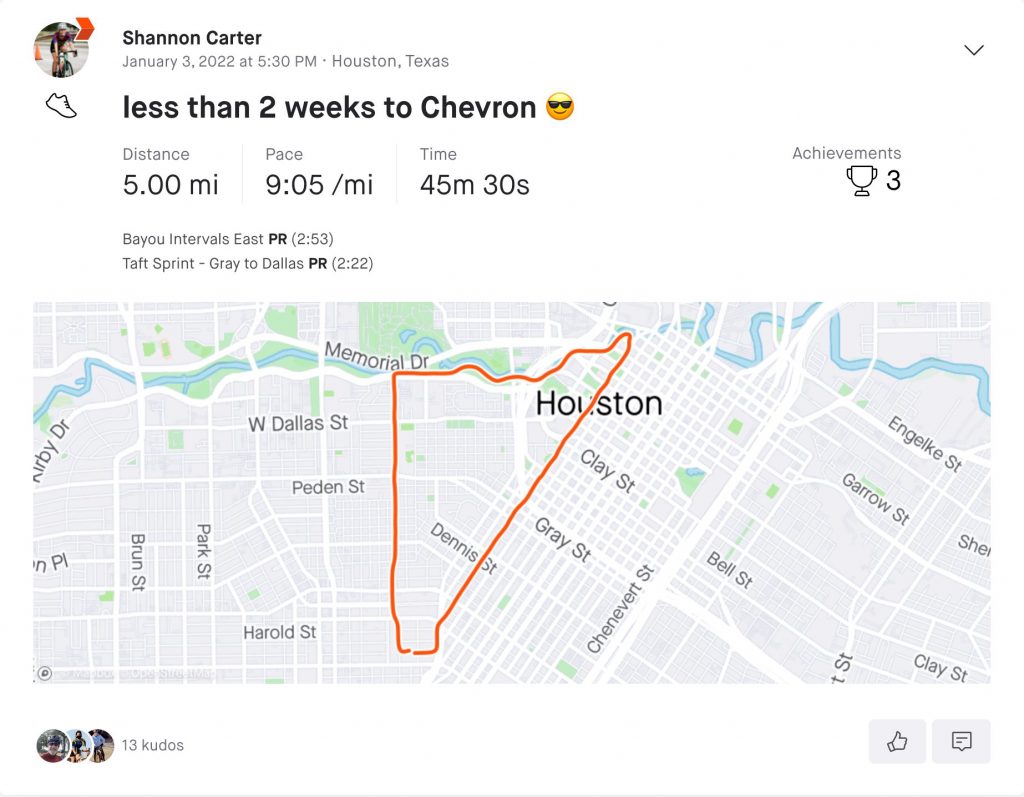 A Strava post shows your running route and some stats. Other users give “kudos” to show support.

Strava is a social media platform for endurance athletes to record and share their fitness activities. Strava users award each other “kudos” for each activity, similar to “likes” on Facebook or Instagram.

I’m excited to participate in the marathon this Sunday. The chance for a PR (personal record) finish time is certainly motivating me, but I’m really striving to maximize the number of kudos. I think I can do it, if I figure out the right kudo formula.

Luckily, I have the data to approach this goal empirically.

Why do some runs get more kudos than others?

I’ve been a Strava user for almost 5 years, and in this time have logged over 2,300 running and cycling activities. Using Strava’s API, I can access data for each of these activities.

For my purposes here, I’ll focus only on my running activities- that’s 721 runs to analyze. The Strava API gives a lot of data for each activity. I selected a handful of factors I suspect might be related to the number of kudos I earn. These all come from the Strava API, though some required some basic data transformations:

I built and fine-tuned a linear model to see how these factors contribute to my kudo count. On average, I get 7.7 kudos per run. But I have a lot of ability to increase that count.

The model explains 53% of kudos for my runs

I tested the quality of the model by seeing how well it predicts the actual number of kudos I received on each run, and it does a pretty good job! Kudo count for 97% of my runs could be predicted within a margin of error. Put another way, 53% of the variation in kudos is explained by factors I modeled.

This high predictive power is expected, because we built the model based on the data, then tested the model with the same data… it’s a bit circular, but still gives some confidence that the model is doing a good job of explaining the data. The real challenge will be to test the model on someone else’s data.

Do other runners get kudos for the same reasons?

So, does this same formula predict kudo counts for other Strava athletes? My friend Gisele (also running the marathon Sunday!) gave me access to her Strava data to put my formula to the test.

Unfortunately, Gisele has some missing data. She doesn’t have a suffer score because she doesn’t run with a heart rate device.  She also doesn’t classify her runs, so we don’t know whether each run was a race or training run (this factor played a big role in my own kudo count).

Because we’re missing two important predictors and because Gisele’s data wasn’t used to develop the model, we’d expect my formula to be less predictive of Gisele’s kudo count. Indeed it is, but it’s still pretty good! She tends to get more kudos than the model predicts, but her kudo count is still within the margin of error 79% of the time.

If I were to give Gisele some advice, it would be to use emojis more liberally. She only uses emojis in 11% of her run titles (compared with my rate of 38%). That’s a lot of free kudos she’s leaving on the table.

So, what does this all mean for our kudo aspirations this weekend?

Given this weekend is a race of great distance, we stand to earn a lot of kudos. Add some emojis and photos, and we’ll both be in kudo PR territory. My model predicts I will earn 39 kudos and Gisele will earn 44 kudos. Indeed, this would be a PR for each of us! But I wouldn’t mind if my model is underestimating, and we actually get even more.

Is anyone else running the marathon or half this weekend? What motivates you? Are you an overanalyzer like me, or just run for the thrill of running?